"The parameter that best represents the role of the solar magnetic field in deflecting cosmic
rays [and hence, the overall level of solar activity] is the solar modulation potential , which can be derived from either the 10Be or the 14C production rates."

Below this is a second figure showing amplitude spectrum of variations in the North American temperature time series over the last ~ 7000 years. The temperature time series is obtained from tree ring data obtained from Bristle Cones on the Southern Colorado Plateau [for the details of the source of this data see: Could This Be The Climate Smoking Gun?  and Salzer and Kipfmeuller (2005). The lower figure shows clear spectral peaks at approximately 88, 106, 130, 148, 209, 232, 353 and 500 years.

This seems to be very strong evidence that Sun has always had an important influence upon climate conditions [such as temperature] at a regional level. Why are some many people ignoring this obvious climate connection? 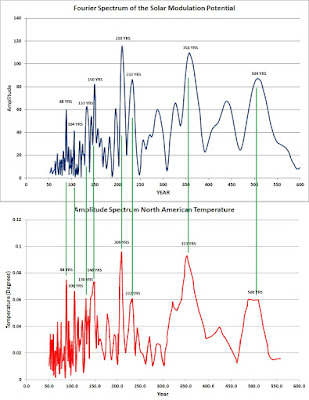 3. Reconstructed temperature and precipitation on a millennial timescale from tree-rings in the Southern Colorado Plateau.
Salzer, M.W. and Kipfmueller, K.F.: 2005,
U.S.A. Climatic Change, 70, No 3, 465–487

Posted by Ninderthana at 7:21 AM