A 2013 Prediction of Severe Drought in South-Eastern Australia in 2019, Willfully Ignored by the Australian Government.

The following shows the front page of Dr. Ian R.G. Wilson's submission to the 2013 Australian Senate Committee on Recent Trends in and Preparedness for Extreme Weather Events. 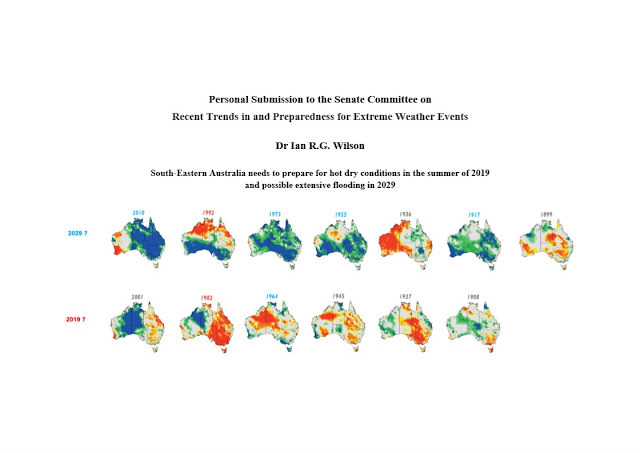 As you can see, there is an unequivocal prediction on the front cover of this report that states that: "South-Eastern Australia needs to prepare for hot dry conditions in the summer of 2019 and possible extensive flooding in 2029".

The Australian Senate and the Australian Government willfully ignored this prediction, leaving it totally unprepared for the terrible suffering of Australia's rural/farming communities bought on by one of the severest droughts in Australian history.

The Australian Government continues to ignore the main conclusions of this submission.
Posted by Ninderthana at 10:49 PM No comments:

Predicting the next phase shift in the AMO.

I predict that the next AMO shift (to a negative phase) will be around 2025 (please see the update below*).

I  showed that between 1870 and 2025, the precise alignments between the lunar synodic [phase] cycle and the 31/62 year Perigean New/Full moon cycle, naturally breaks up into six 31-year epochs each of which has a distinctly different tidal property. Note that the second of these 31-year intervals starts with the precise alignment on the 15th of April 1870, with the subsequent epoch boundaries occurring every 31 years after that:

There is one important caveat to my prediction for the next transition date for the phase change of the AMO.

A more detailed analysis of the transitional spring tidal events in the Perigean Spring New/Full moon cycles shows that they slowly drift into and then out of alignment with the nominal seasonal boundaries. This means that the end of the epoch that starts in 1994.237 (i.e Epoch 6) may not be in 2025.243 (i.e. 31-year later – see table 2) as the spring tidal events would no longer be in close alignment with the seasonal boundaries.

Hence, it is possible that the AMO may undergo a transition in its phase (from positive to negative) as early as 2020.
Posted by Ninderthana at 9:38 AM No comments:

Evidence That the 11-Year Solar Cycle Influences the Strength of the Walker Circulation.

During periods where the La Nina/Neutral mode of the ENSO dominates, the trade winds blow strongly from east to west across the equatorial Pacific Ocean. The presence of these strong winds results in a corresponding strengthening of the Walker circulation cell. Note that the trade winds are generally stronger during the La Nina phase compared to the Neutral phase.

During periods where the El Nino mode of the ENSO dominates, the east to west flow of the trade winds across the equatorial Pacific Ocean substantially weaken. This results in a corresponding weakening of the Walker circulation cell.

Let's consider the possibility that the natural forcing factors that produce a La Nina/Neutral mode in the ENSO are not the same as those that produce an El Nino mode. If this is true, then the main interaction between these two phenomena would just be that the presence of one would (by necessity) preclude the presence of the other.

Hence, a more realistic investigation of the factors driving the La Nina/Neutral phenomenon could be carried out if the La Nina/Neutral component of an ENSO index time series could be isolated from its EL Nino component. One such index is the monthly Nino3.4 SST anomaly which exceeds 0.8 C when the ENSO in the equatorial Pacific Ocean is in an El Nino state.

Clearly, there is no easy way to fully isolate the ENSO La Nina/Neutral state, however, it could be crudely done by simply setting all the monthly Nino3.4 SST anomalies above 0.8 C to zero. This would have the gross effect of partially subduing spectral component associated with the El Nino state. In the following, this time series will be referred to as the monthly Nina3.4 SST anomaly.

Superimposed on the top plot in figure 1 is the 11-year component (red curve) obtained from Singular Spectral Analysis (SSA) of the monthly Nina3.4 SST anomaly time series (see figure 3 below for the SSA plot). A comparison between the red and black curves shows that, except for a brief period around 1955 (i.e. ~ 65 months), the 11-year SSA component seems to match the smoothed long-term variations of the monthly Nina3.4 SST anomaly data.

The bottom plot in figure 1 shows the monthly sunspot number (SSN) between 1950 and 2017, also plotted against the number of months since 1950. As you can see, there is a good phase match between the 11-year SSA spectral component and the 11-year cycle in the SSN.

Note that the data in figure 1 implies that there is a weakening (or slow down) of the Walker Circulation at times near solar maximum. This is in agreement with a recently published paper:

The authors of this paper provide robust evidence that the solar (sunspot) cycle affects decadal variability in the tropical Pacific. Using the analysis of independent observations, they demonstrate a slowdown of the Pacific Walker Circulation (PWC) at solar cycle maximum. 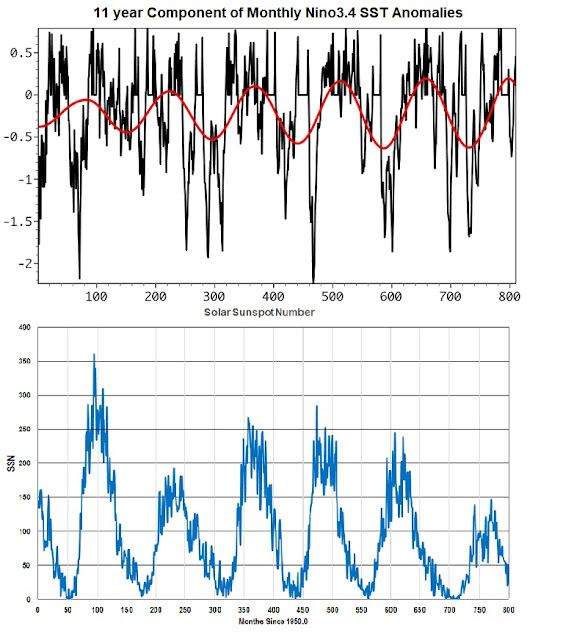 The presence of spectral peaks at periods associated with the FMC and the (lunar) Draconic year indicates that there must a lunar tidal influence upon the timing of the La Nina/Neutral component of the ENSO phenomenon. 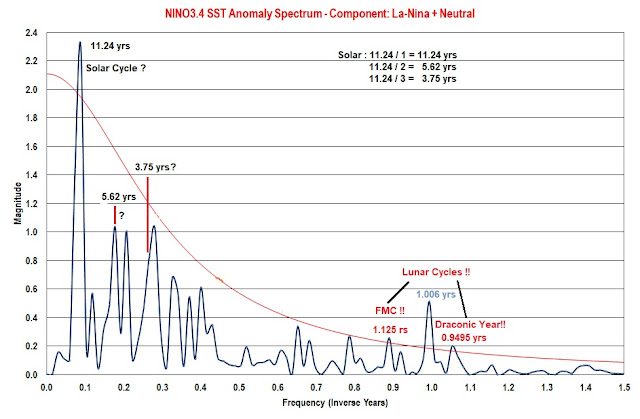 Figure 3 shows the SSA of the monthly Nina3.4 SST anomalies presence of: 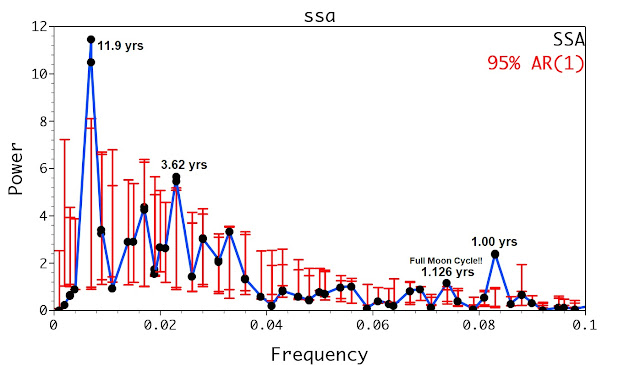 Posted by Ninderthana at 9:01 AM No comments: