The VEJ Tidal Torquing Model can explain many of the long-term changes in the level of solar activity.

It has long been recognized that there is a prominent 208 year de Vries (or Suess) cycle in the level of solar activity. Its appearance, however, is intermittent. Careful analysis of the Be10 and C14 ice-core records show that the de Vries cycle is most prominent during epochs that are separated by about 2300 years (Vasiliev and Dergachev, 2002).  This longer modulation period in the level of solar activity is known as the Hallstatt cycle ( Vitinsky et al., 1986; Damon and Sonett, 1991; Vasiliev and Dergachev, 2002).

1. The VEJ tidal-Torquing model proposes that tidal bulges are formed in the base of the convective layers of the Sun by the periodically alignments of Venus and the Earth, and that it is the gravitational torque that are applied to these bulges by Jupiter that are responsible for the long-term modulation of the Solar activity cycle. Hence, it needs to be shown that the torques that are applied by Jupiter to these tidally induced bulges, naturally exhibit a 2300 year Hallstatt-like cycle.

2. The length of the 243 year Venus transit cycle is set by the time it takes for the Earth-Venus-Sun line to re-align itself with one of the "fixed" nodes of Venus' orbit. Hence, the length of the transit cycle is determined by time it takes for the five-pointed star Venus-Earth alignment pattern to re-establish rotational symmetry plus the time it then takes for the Venus-Earth alignments to return to the "fixed" node [Note: "fixed" in this case means, roughly the same position with respect to the fixed stars].

4. It is shown that the Jupiter torque cycle naturally exhibits a 2302 year Hallstatt-like cycle.

(*) Note that most of the values used in this blog post are stated to four decimal places. This is not being done to claim that the values have a precision to this level of accuracy but solely for the purposes of delaying the curtailment of the number of decimal places until the end of the calculations. In addition, it is important to note that the calculation done here are just a preliminary attempt to explain why the VEJ Tidal-Torquing model produces changes in planetary torque acting upon the Sun that exhibit a Hallstatt-like cycle. A detailed analysis of ephemeris data will have to be done before these preliminary results can be confirmed.

Venus-Earth Alignments in a Reference Frame That is Fixed with Respect to the Stars.

The following diagram shows five consecutive alignments of Venus and the Earth following the alignment of 2004. Each inferior conjunction of the Earth and Venus (i.e. VE alignment) is separated from the previous one by the Venus-Earth synodic cycle i.e. 1.59866 years. This means that, on average, the Earth-Venus-Sun line moves by 144.4824 degrees in retrograde direction, once every VE alignment. Hence, E-V-S line returns to almost the same orientation with respect the stars after five VE alignments or eight Earth (sidereal) years [actually 7.9933 years].

Hence, the 239.7990 year realignment symmetry for the VE alignments naturally produces a 243 year repetition time between the transits of Venus in front of the Sun. The reason for this is that the star point that is aligned with the South Node of Venus' orbit (i.e. the one pointing out of the figure above) moves one to the left after 239.7990 years, and so two extra VE alignments are required (along lines 4 and 5 in the above diagram) on top of the 150 VE aligns in 239.7990 years. This means that it takes 152 VE alignments = 242.9963 ~ 243 years before the Earth and Venus re-align near the South Node of Venus' orbit,  again.

Hence, the VE alignment pentagram has a 2390 year Hallstatt-like symmetry re-alignment cycle with respect to the fixed stars. There raises the possibility that this 2390 year cycle could play a role in modulating any long term cycles that exist in the torque being applied by Jupiter to the VE tidal bulge.

However, to look for these long-term periodicities in Jupiter's torque, we need to investigate how Jupiter moves, with respect to the periodic VE tidal bulge in the convective layers of the Sun. This requires us to look at the motion of Jupiter in both a fixed frame with respect to the stars and a frame that is revolving about the Sun at the same rate as the periodic VE alignments.

The diagram immediately below shows the orbital position of Jupiter, starting at (0,1), every 0.79933 years, over a period of 35.9699 years [i.e. just over three orbits of the Sun]. It is clear from this diagram that, in a reference frame that is fixed with respect to the stars,  the symmetry pattern perfectly re-aligns after moves roughly 24.26 degrees in a clockwise (pro-grade) direction. It takes Jupiter 71.9397 years (i.e. just over six orbits of the Sun or 45 VE aligns) to move 23.30 degrees in a clockwise (pro-grade) direction, to approach with one degree of producing a re-alignment of rotational symmetry. 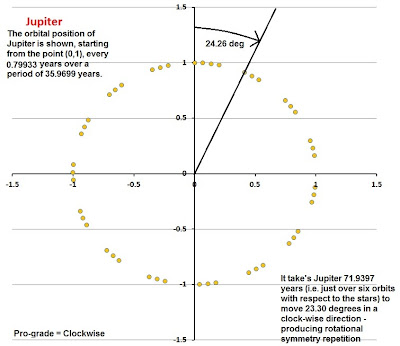 The Movement of Jupiter with Respect to the Tidal-Bulge that is Induced in the Convective Layers of the Sun by Periodic Alignments of Venus and the Earth.

The following diagram shows the position of Jupiter every VE alignment (i.e. 1.59866 years) in reference frame that is rotating with the Earth-Venus-Sun alignment line. This keeps the Earth and Venus at the 12:00 o'clock position in this diagram whenever the number of VE aligns is even and at the 6:00 o'clock position whenever the number of VE aligns is odd. In contrast, Jupiter starts out at JO and moves 12.9993 degrees every 1.59866 years, taking 11.07 years to move exactly 90 degrees in the clockwise (pro-grade) direction and 11.19 years to the position marked J7. 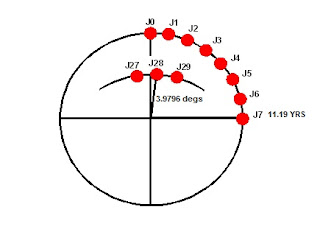 Also shown on this diagram is the position of Jupiter after 27, 28 and 29 VE alignments. This tells us that Jupiter completes exactly one orbit in the VE reference frame once every 44.28 years (= 11.07 years x 4), with the nearest VE alignment taking place at 28 VE alignments (= 44.7625 years) when Jupiter has moved 3.9796 degrees past realignment with its original position at JO.

The following table shows how Jupiter advances by one orbit + 3.9796 degrees every 28 VE alignments until the alignment of Jupiter with the Earth-Venus-Sun line progresses forward by
13 orbits in the VE reference frame plus 51.7345 degrees. This angle (see * in table) is almost exactly equal to the angle moved by Jupiter in 4 VE aligns (i.e. 4 x 12.99927 degrees = 51.9971 degrees).

This means that Jupiter returns to almost exact re-alignment with the Earth-Venus-Sun line after:

The following diagram shows the precise alignments Jupiter with the Earth-Venus-Sun line at
575.5176 years (360 VE aligns) and 1151.0352 years (720 VE aligns) in a frame of reference that is fixed with respect to the stars. Jupiter lags behind the VE alignments by 0.2654 degrees and 0.5251 degrees, respectively. 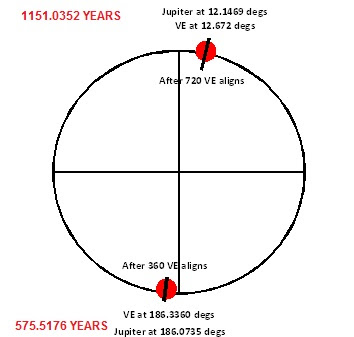 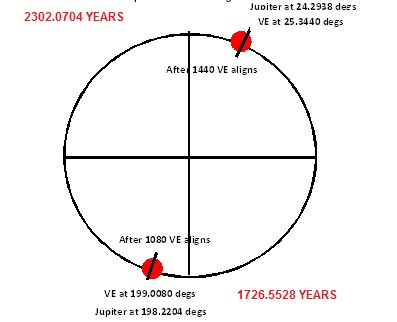 The important point to note is that after four precise Jupiter alignments of 575.5176 years (= 2302.0704 years), the position of Jupiter advances from its initial position at JO (see the third diagram in this blog post) by 24.2983 degrees. This angle is almost exactly the same as 24.26 degrees of rotation that is required to produce a re-alignment of the rotational symmetry of Jupiter, in the reference frame that is fixed with respect to the stars.

Hence, the period of time required for Jupiter to precisely re-align with the Earth-Venus-Sun line in a reference frame that is fixed with respect to the stars is 2302 years. This is the Hallstatt-like cycle that is naturally found in the planetary configurations that are driving the VEJ Tidal-Torquing model for solar activity.