One of the most prominent long-term cycles that have been identified is the ~210 year de Vries (Suess) cycle. However, because of the limited time over which instrumental observations have been available, the confirmation of the de Vries cycle [1] has required the use of proxies such as de-trended δC14 from tree rings [2,3], Be10 levels in the GRIP ice cores [4,5,6], and dust profiles in GISP2 ice cores [7].  These proxy observations have indicated that:

a) the de Vries cycle amplitude varies with a period of about 2200 years [6]. In other words, its appearance is intermittent in nature.

Abreu et al. (2012) [5] have identify a 208 year period in a 9400 year reconstruction of the solar modulation potential that is derived from C14 and Be10 observations taken from ice cores. The solar modulation potential is thought to be a good indicator the strength of the solar magnetic field that is responsible for the deflection of cosmic ray, and so a good proxy of the overall level of past solar magnetic activity. Abreu et al. (2012) [5] also show that there is a 208 year period in the planetary induced torques that could act upon any asymmetric structure in the boundary layer known as the solar tachocline. These authors propose that it these planetary induced torques that could be responsible for modulating the long-term solar magnetic activity on the Sun.

Abreu et al. (2012) [5] do not identify the specific physical mechanism that is responsible for producing the 208 year period in the planetary torques, although it is reasonable to assume that it must be linked in some way with the synodic interactions between orbital period of Jupiter [the main source of planetary torque] and one or more of the other planets.

However, it can be shown that there is a natural 208 year periodicity associated with the position of the Earth in its orbit when it is observed at intervals separated by half the precession cycle of the Lunar line-of-apse, in a reference frame that is fixed with respect to the stars.

The following diagram shows the angle that the Earth in its orbit about the Sun forms with a fixed direction in a sidereal reference frame, at time steps of half the precession period of the lunar line-of-apse (= 4.42558131 sidereal years for 2000.0). This angle is plotted as a function of time measured in sidereal years. 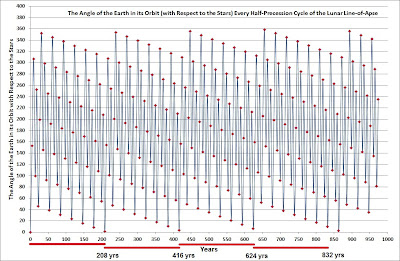 The above diagram clearly shows that there is a natural 208 year periodicity in the alignment of the Earth with respect to the fixed with the stars when it is observed every half precession cycle of the Lunar line-of-apse. It also shows that the 208 year periodicity in alignment slowly drifts out synchronization over a period ~ 500 years. Hence, this Earth/Lunar alignment pattern exhibits two characteristics that mimic those of the de Vries cycle, namely a periodicity of 208 years and slow loss of synchronicity on millennial time scales.

An alternative way to display the 208 year Earth/Lunar cycle that is based upon ephemeris data rather than extrapolated mean lunar orbital data is shown in the following diagram [8].

This diagram shows the number of hours perigee is away from New or Full Moon, when the Moon is at perigee between the 27th of December and the 10th of January, plotted against time in years. 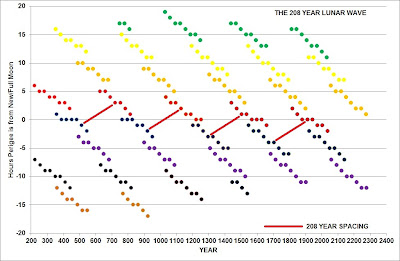 The limits that have been placed upon the dates of perigee are designed to restrict the observational window to +/- seven days either side of a nominal fixed date in the seasonal calender (in this case the 3rd of January which roughly corresponds to modern day Perihelion). In essence, they are restricting the observational window to +/- a quarter of a lunar orbit either side of a point in the Earth's orbit that is "fixed" with respect to the stars.

There are three separate colour groupings in this diagram. The first grouping, vertically from the top to the bottom of the diagram, is green, red and black. The second is yellow, blue, and brown and the third is orange and purple. As you move vertically down from one colour to the next in a given colour grouping, you advance by almost exactly four years e.g. if you pick a set of green dots near the top of the diagram, the set of red dots immediately below it are shifted forward in time by four years, and the set black dots immediately below the red dots are shifted forward by a further four years.

Detailed investigations show that paired points in the above diagram that are separated by 208 years, occur almost exactly 2 1/3 days apart in the seasonal calendar. This accounts for the change between the observed time of perigee and the time of New/Full Moon that occur between the paired points separated by 208 years (i.e. it accounts for the slope of the red line and, hence, the tilt of the diagonal waves).

So, what it is telling us is that if we correct the above diagram for the effects of the precession of equinoxes (i.e. correct for the drift between our co-ordinate frame and the fixed stars) we get a Earth/Lunar repetition cycle for the position of the Earth in its orbit (with respect to the stars) of 208 years.

[see the updated and corrected blog post at:
http://astroclimateconnection.blogspot.com.au/2013/08/the-vej-tidal-torquing-model-can.html  ]

Similarly, the relative position of the Moon in its orbit about the Earth compared to the Lunar line-of-apse reset themselves with respect to the Sun and the fixed stars almost exactly once every 31.0 sidereal years (actually closer to 31.0 sidereal years + 2 days). This comes about because:

Now, it seems quiet remarkable that:

a) The position of the Earth in its orbit, as seen once every half precession cycle of the Lunar line-of-apse (= 4.42558131 sidereal years for 2000.0), resets itself with respect to the stars once every 208.0 sidereal years.

b) The relative position of the Moon in its orbit about the Earth compared to the Lunar line-of-apse reset themselves with respect to the Sun and the fixed stars almost exactly once every 31.0 sidereal years.

One is left with the feeling that this is more than just a coincidence.