Why Does the Solar Cycle Keep Re-synchronizing Itself With the Gravitational Force of Jupiter That is Tangentially Pushing and Pulling Upon the Venus-Earth Tidal Bulge in the Sun's Convective Layer?

is based upon the idea that the gravitational force of Jupiter
acts upon the Venus-Earth tidal bulge that periodically
forms in the convective layer of the Sun. The cumulative effects
of Jupiter's gravitational force (acting on the tidally induced
asymmetry) produces a tidal torquing that systematically
slows and then speeds up the rotation rate of a thin shell of the
Sun's convective zone. The model proposes that it is these
changes in rotation rate that modulate the level of activity of
the sunspot cycle and possibly produce the torsional oscillation
that are observed in the Sun's convective layer.

The blue curve in figures 1a, 1b, 1c, and 1d, shown below, is
the time-rate of change of the gravitational force of Jupiter,
tangential to the Sun's surface, that acts upon the periodically
induced tidal bulge produced by the alignments of Venus and the
Earth every 1.599 years. The brown curve is simply the 1,2,1
binomial filtered version of the blue curve. Superimposed on
each of these figures are green vertical lines showing the dates
of solar minimum.

Note: The vertical axis is the time-rate of change of the
gravitational force of Jupiter, acting tangential to the Sun's
surface, that pulls and pushes upon the periodically induced
tidal bulge produced by the alignments of Venus and the Earth.
The units are metres per second^(2) per 1.599 years and it is
assumed that Jupiter's gravitational force is acting upon one
percent of the mass of the convective layer of the Sun
(=0.02 % of the mass of the Sun). 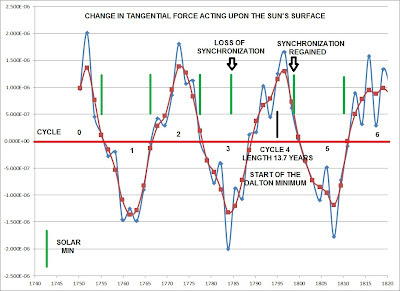 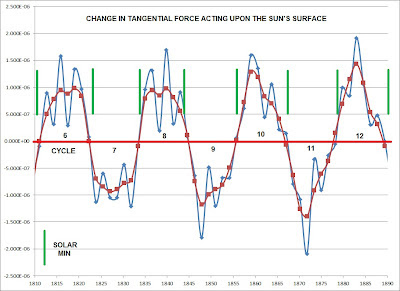 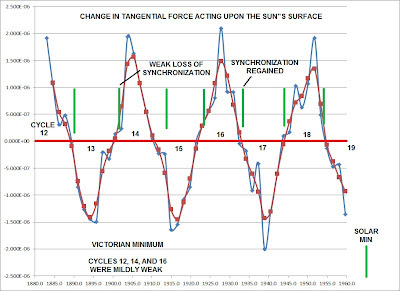 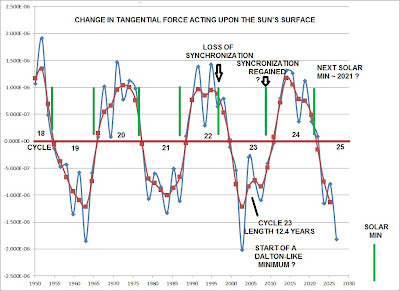 Collectively, figures 1a  to 1d can be used to establish
two very important rules:

In all but two cases between 1750 and 2030,
the time of a solar minimum is tightly synchronized
with time that the change in the gravitational force
of Jupiter, acting tangentially on the Venus-Earth
tidal bulge, is a minimum.

The two exceptions to this rule, are the minima at
the start of cycle 4 (see figure 1a) and cycle 23
(see figure 1d). In each case there is a clear loss
of synchronization between the rate of change of
Jupiter's tangential acceleration and the timing of
the first minimum for that solar cycle. The loss of
synchronization is in the sense that the sunspot
minimum takes place more than ~ 3 years earlier
than the zero point in the change in Jupiter's
tangential acceleration.

The thing that makes cycles 4 and 23 stand out
from all the other sunspot cycles is the fact that
they are amongst the longest sunspot cycles
between 1750 and 2012, with cycle 4 lasting 13.7
years and cycle 23 lasting 12.4 years. Additionally,
both of these cycles were long lasting because the
decay of each from their respective maximum
sunspot number was considerably longer than normal.

It also important to note that Cycle 4 was followed
by a two weak solar cycles (cycles 5 and 6) known
as the the Dalton Minimum. Many now believe that
the same thing is happening again with Cycles 24
and perhaps cycle 25 being historically weaker than
normal.

On the two occasions where synchronization is
significantly disrupted ( > 3 years - at the start
of cycles 4 and 23), the timing of the first sunspot
minimum of the next cycle immediately
re-synchronizes with the timing of the minimum
change in Jupiter's tangential force acting upon
Venus-Earth tidal bulge (NB There is a correction
to this rule in comment 7 below).

This raises the important question:

Why does the Solar sunspot cycle re-synchronize itself
with the gravitational force of Jupiter that is tangentially
pushing and pulling upon the Venus-Earth tidal bulge in
the Sun's convective layer?

The simplest explanation is that tidal torquing of Jupiter
upon the Venus-Earth tidal bulge must play a role in
determining the long-term changes in the overall level of
activity of the sunspot cycle.

Posted by Ninderthana at 7:43 AM