Please read this post if you are not familiar with this topic
and the V-E-J Tidal Torquing model:


Here is the abstract of a recent publication by

REVISITED SUNSPOT DATA: A NEW SCENARIO FOR
THE ONSET OF THE MAUNDER MINIMUM


ABSTRACT
The Maunder minimum forms an archetype for the Grand
minima, and detailed knowledge of its temporal
development has important consequences for the solar
dynamo theory dealing with long-term solar activity
evolution. Here, we reconsider the current paradigm of
the Grand minimum general scenario by using newly
recovered sunspot observations by G. Marcgraf and
revising some earlier uncertain data for the period
1636-1642, i.e., one solar cycle before the beginning of
the Maunder minimum. The new and revised data
dramatically change the magnitude of the sunspot cycle
just before the Maunder minimum, from 60-70 down to
about 20, implying a possibly gradual onset of the
minimum with reduced activity started two cycles
before it. This revised scenario of the Maunder
minimum changes, through the paradigm for Grand
solar/stellar activity minima, the observational
constraint on the solar/stellar dynamo theories
focused on long-term studies and occurrence of
Grand minima.

The main result of this paper is shown in the
following figure from the paper, a summary of
which is available at: 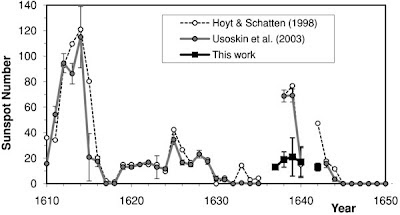 
The 60 year hiatus in solar activity known as the Maunder

Minimum is normally thought to have started in 1645. However,
the paper by Vaquero et al. (2011), clearly shows that solar
activity started  faltering two solar sunspot cycles earlier
than this in about 1618.

Now the question is, does the V-E-J tidal torquing model
agree with this re-interpretation of the onset of the Maunder
Minimum?

The blue curve in figures 2a and 2b, shown below, is the
time-rate of change of the gravitational force of Jupiter,
tangential to the Sun's surface, that acts upon the periodically
induced tidal bulge produced by the alignments of Venus and the
Earth every 1.599 years. The brown curve is simply the 1,2,1
binomial filtered version of the blue curve. Superimposed on
each of these figures are green vertical lines showing the dates
of solar minimum.


Figure 2a shows the period from 1590 to 1680 and figure 2b the
period from 1670 to 1750. The cycle number for each solar
sunspot cycle is displayed in each of the figures.
Note: The vertical axis is the time-rate of change of the
gravitational force of Jupiter, acting tangential to the Sun's
surface, that pulls and pushes upon the periodically induced
tidal bulge produced by the alignments of Venus and the Earth.
The units are metres per second^(2) per 1.599 years and it is
assumed that Jupiter's gravitational force is acting upon one
percent of the mass of the convective layer of the Sun
(=0.02 % of the mass of the Sun). 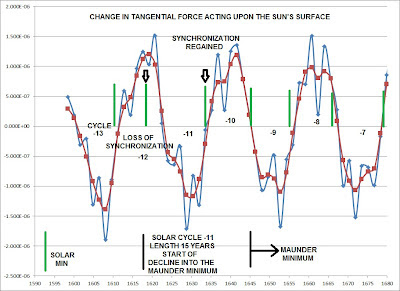 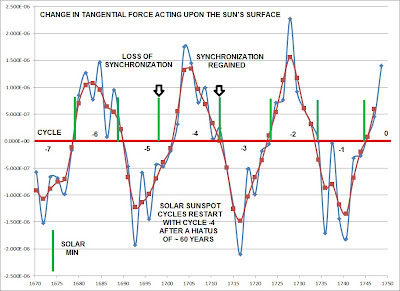 
Amazingly, these two dates mark the start of the descent into the
Maunder Minimum in 1618, according to the modified onset
scenario of Vaquero et al. (2011), and the abrupt restart of
solar activity in 1698 with the first minimum of cycle -4.


Thus, there are now FOUR [out of a total of four] loss of
synchronization events that closely correspond to the four
most important changes in the level of sunspot activity over
the last ~ 410 years:


This is absolutely amazing!