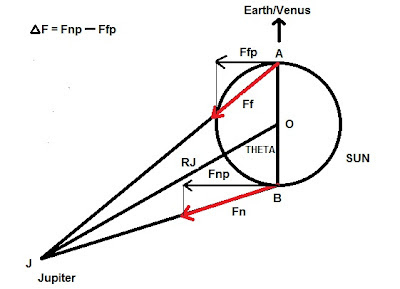 Jupiter is located at an angle θ to the line joining the two tidal
bulges at A and B. Let Rs be the radius of the Sun = OA = OB.

Now by the cosine rule:

then by the sine rule:


Venus/Earth upon the Sun's surface
as a function of Jupiter's angle θ (please refer to diagram above).
Note: It is assumed that Jupiter's force only acts upon one percent
of the mass of the convective zone of the Sun (=0.0002 % of the
mass of the Sun).


Even under these ideal assumptions, the maximum peak acceleration 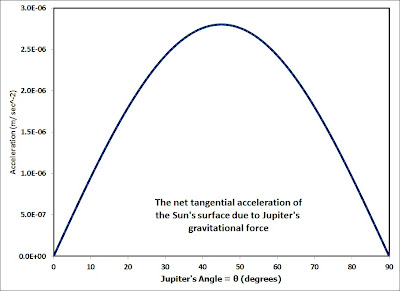 Assuming that half this peak acceleration is applied to 0.02 % of the
Sun's mass for one full day at each of the roughly seven alignments
of Venus and Earth over the 11.07 years it takes for θ to change from
0 to 90, the net change to to the Sun's velocity should be


Given these large uncertainties, all we can say is that the
0.91 m/sec change in rotational velocity is most likely a
loose upper bound to the real value.


(N.B. All the arguments given above assume that there are
no other induced asymmetries in the spherical shape of the Sun
other than those produced by the combined tidal forces of
Venus and Earth at the time of alignment).

The simple planetary spin-orbit coupling model does not
appear to produce a significant change in the velocity of
rotation in the outer layers of the Sun.

Hence, in order for it to taken seriously, the planetary
spin-orbit coupling model would require a considerable
and as yet unknown amplification mechanism .

Posted by Ninderthana at 9:02 PM