Do Periodic Peaks in the Planetary Tidal
Forces Acting Upon the Sun Influence the
Sunspot Cycle?

A free download of the paper is available in the General
Science Journal were it was published in 2010
http://www.wbabin.net/Science-Journals/Essays/View/3812

The General Science Journal paper (above) was written in
order to further investigate the main conclusion of the Wilson
et al. (2008) paper that the Sun's level of solar activity is
driven by a spin-orbit coupling mechanism between the Sun
and the Jovian planets:

Publications of the Astronomical Society of Australia, 2008,
25, 85–93.
Does a Spin–Orbit Coupling Between the Sun and
the Jovian Planets Govern the Solar Cycle?

The spin-orbit coupling mechanism investigated in the
General Science Journal paper is based on the idea that the
planet that applies the most dominant gravitational force upon
the Sun is Jupiter, and that after Jupiter, the planets that apply
the most dominant tidal forces upon the Sun are Venus and
the Earth. 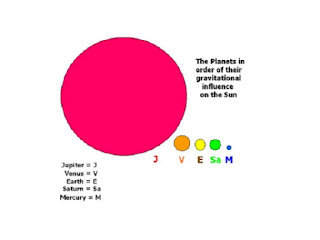 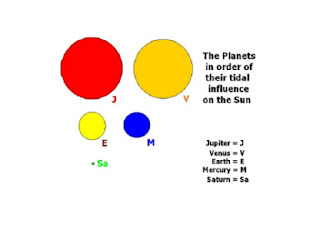 The spin-orbit coupling mechanism is based upon the idea that
periodic alignments of Venus and the Earth (once every 1.5993
years) produce temporary tidal bulges along the Earth-Venus
-Sun line, on opposite sides of the Sun. When these temporary
tidal bulges occur, Jupiter's gravitational force tugs on these
bulges and either slows down or speeds up the Sun's rotation.

What makes this particular spin-orbit coupling mechanism
intriguing, is the time period over which the Jupiter's
gravitational pull speeds up and slows down the Sun rotation
as Jupiter tugs on the tidal bulges. 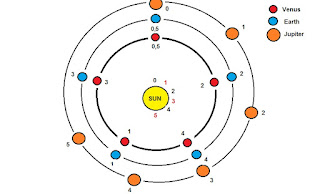 [N.B. In the above diagram the planets are revolving in a
clock-wise direction and the Sun is rotating in a clock-wise
direction. Also, when near-side and far-side tidal bulges on
the Sun's surface are referred to, it is with respect to the
aligned planets Earth and Venus.]

The diagram above shows Jupiter, Earth and Venus initially
aligned on the same side of the Sun (position 0). In this
configuration, Jupiter does not apply any lateral torque upon
the tidal bulges (The position of the near side bulge is shown by
the black 0 just above the Sun's surface).

1.5993 years later, each of the planets move to their respective
position 1's. At this time, Jupiter has moved 13.000 degree
ahead of the far-side tidal bulge (marked by the red 1 just
above the Sun's surface) and the component of its
gravitational force that is tangential to the Sun's surface tugs
on the tidal bulges, slightly increasing the Sun's rotation rate.

After a second 1.5993 years, each of the planets move to
their respective position 2's. Now, Jupiter has moved 26.00
degrees ahead of the near-side tidal bulge (marked by the
black 2 just above the Sun's surface), increasing Sun's
rotation rate by roughly twice the amount that occurred at
the last alignment.

This pattern continues with Jupiter getting 13.000 degrees
further ahead of the alternating near and far-side tidal bulges,
every 1.5993 years. Eventually, Jupiter will get 90 degrees
ahead of  the closest tidal bulge and it will no longer exert a
net torque on these bulges that is tangential to the Sun's surface
and so it will stop increasing the Sun's rotation rate.

Interestingly, the Jupiter's movement of 13.000 degrees per
1.5993 years with respect to closest tidal bulge, means that
Jupiter will get 90 degrees ahead of the closest tidal bulge in
11.07 years. This is almost the same amount of time as to
mean length of the Schwabe Sunspot cycle (11.1 +/- 1.2 years).

In addition, for the next 11.07 years, Jupiter will start to lag
behind the closest tidal bulge by 13.000 degrees every
1.5993 years, and so its gravitational force will pull on the
tidal bulges in such a way as to slow the Sun's rotation rate
down.

However, the complete planetary tidal cycle is actually
(4 x11.07 years =) 44.28 years.
Now the outer Jovian planets act like a large washing
machine, stirring the inner terrestrial planets with a
gravitational force that varies with a frequency that is the
beat period between two main competing Jovian planetary
alignments.

The first is that produced by the the retrograde tri-synodic
period of Jupiter/Saturn ( = 59.577 yrs) and the second is
the pro-grade synodic period of Uranus/Neptune (171.41 yrs):

In addition, there is a remarkable near-resonance condition
that exists between the orbital motions of the three largest
terrestrial planets with:

This means that these three planets return to the same
relative orbital configuration once every 6.40 years, and
that exactly 7.0 times this re-alignment period is 44.8 years,
close to the 44.2 - 44.3 year period cited above for the
gravitational forcing of the Jovian planets upon the terrestrial
planets.

Further evidence for a link between the re-alignment period
of the three largest Terrestrial planets and the period of Jupiter
comes from the fact that:

This means that Venus, Earth and Jupiter, in particular, form
alignments at sub-multiples of Jose cycle 178.72 years i.e.

These alignments only change slowly over hundreds of
years and they closely match the well known Schwabe
(~ 11.1 yrs), Hale (~ 22.2 yrs) and Gleissberg (~ 90 years)
solar cycles.

It would appear that a simple spin-orbit coupling mechanism
proposed in this posting would naturally produce a  link
between systematic changes in the rotation rate of the Sun
that would be synchronized with the Bary-centric motion of
the Sun about the centre-of-mass of the Solar System as
suggested by Wilson et al. (2008).

APPENDIX - Some additional matches between the
planetary orbital cycles and the long term periodicities
that are observed in the level of Solar activity.

There is an 8:9 resonance between the Hale and JS cycles

A grand alignment of the Jovian planets (Jupiter, Saturn,
Uranus, Neptune), with all of the planets arranged in a
line on the same side of the Sun, occurs roughly every
4628 year.

Half this realignment period is 2314 years which is close
to the long term solar cycle called the Hallstatt cycle.
cycle

Posted by Ninderthana at 9:45 AM