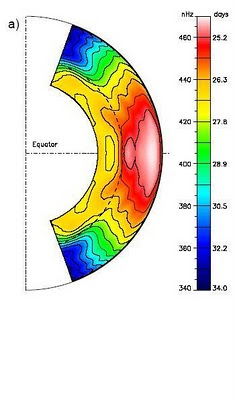 The image above is a cross-section of the Sun showing the rotational periods of a section of it's interior.
The rotation rates range from about 34.0 days near the poles to about 25.2 days in the Sun's equatorial convective zone. The dotted line that is located ~ 0.7 solar radii out from the centre of the Sun marks the positions the Solar Tachocline. This represents the boundary between the core of the Sun, were the main form of energy transport is by radiation, and the outer convective layer of the Sun, where the main form of energy transport is by convection.

Amazingly, if the rotation period of the point just below the equatorial Tachocline was in fact 26.3365 days, you would get an amplified resonance between the tides of the two dominant tidal forcing Terrestrial planets, Venus and Earth.

Consider the case where the Earth and Venus are aligned in their orbits about the Sun, roughly above the Equator of the Sun (note: these planets can be located up to +/- 7 degrees from the Sun's equator). Take a
point (A) just below the Tachocline boundary that is right on the Sun's equator, and a point (B) that is dierctly above it, at the mid (radial) point in the equatorial convective layer of the Sun. In this configuration, the tidal bulges produced by the combined gravitational forces of Venus and Earth upon the convective layer of the Sun would be superimposed upon one another.

Note that Venus and Earth Align rougly once every 1.599 sidereal years and that five these alignments is:

and that for the rotation periods of point A and B in the Sun's outer convective layers:

with realignment errors of 1 to 3 days.

This is absolutely amazing!

Posted by Ninderthana at 5:05 AM