The synchronization between the Solar Inertial Motion and the Lunar Orbit 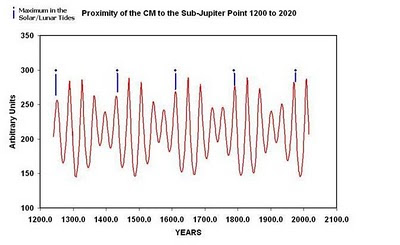 Figure 6. The main curve shows the distance of the centre-of-mass of the Solar system from the sub-Jupiter point between 1220 and 2020 A.D. The sub-Jupiter point1 is located just above the solar surface on a line joining the centre of the Sun to Jupiter. Marked above this curve are years in which the Earth experienced exceptionally strong tidal forces over the last 800 years.

Figure 6 shows that the times when Solar/Lunar tides had their greatest impact upon the Earth are closely synchronized with the times of greatest asymmetry in the Solar Inertial Motion (SIM). Over the last 800 years, the Earth has experience exceptionally strong tidal forces in the years 1247, 1433, 1610, 1787 and 1974 (Keeling and Whorf, 1997). A close inspection of Figure 6 shows that these exceptionally strong tidal forces closely correspond in time to the first peak in the asymmetry of the SIM that occurs just after a period low asymmetry. These first peaks in asymmetry in the SIM occur in the years 1251, 1432, 1611, 1791, and 1971, closely correspond the years of peak tidal force.

Thus, there appear to be periodic alignments between the lunar apsides, syzygies and lunar nodes that occur at almost exactly the same times that the SIM becomes most asymmetric for the first time after a period of low asymmetry in the SIM. It means that precession and stretching of the Lunar orbit (i.e. the factors that control the long-term variation of the lunar tides that are experienced here on Earth) are almost perfectly synchronized with the SIM.
We know that the strongest planetary tidal forces acting on the lunar orbit come from the planets Venus, Mars and Jupiter. In addition, we known that, over the last 4.6 billion years, the Moon has slowly receded from the Earth. During the course of this lunar recession, there have been times when the orbital periods of Venus, Mars and Jupiter have been in resonance(s) with the precession rate for the line-of-nodes the lunar orbit. When these resonances have occurred, they would have greatly amplified the effects of the planetary tidal forces upon the lunar orbit. Hence, the observed synchronization between the precession rate of the line-of-nodes of the lunar orbit and the orbital periods of Venus, Earth, Mars and Jupiter, could simply be a cumulative fossil record left behind by these historical resonances.
Of course, the orbital periods of Jupiter and the other Jovian planets are responsible for the
periodicities observed in the motion of the Sun about the Solar Sytem barycentre. Hence, the apparent link between the Sun's barycentric motion and the orbit ofthe Moon may just be an artifact of the fact that both are heavily influenced by the periodicities in the motion of the Jovian planets.
Posted by Ninderthana at 6:57 AM