Are Lunar Tides Responsible for Most of the Observed Variation in the Globally Averaged Historical Temperature Anomalies?

PART A: Evidence for a Luni-Solar Tidal Explanation

A. Keeling and Whorf
Keeling and Whorf [2] "present evidence that global temperature has fluctuated quasi-decadally since 1855, except for an interruption between about 1900 and 1945, thus supporting previous claims of failures of weather phenomena to maintain a correlation with the sunspot cycle near 1920. This interruption, although difficult to explain by a sunspot mechanism, does not rule out a tidal mechanism, because the astronomically driven tide raising forces since 1855 have exhibited strong 9-year periodicity only when quasi-decadal periodicity was evident in temperature data. Furthermore, unlike the perplexing shift in the phase of quasi-decadal temperature fluctuations with the sunspot cycle between the 19th and 20th centuries, there was no such shift in phase with respect to tidal forcing."

[N.B. Figure 3 of Keeling and Whorf [http://www.pnas.org/content/94/16/8321.full.pdf] clearly shows the 180 degree phase shift between the mean sunspot number and decadal band-pass of global surface temperature between about 1900 and 1945.] 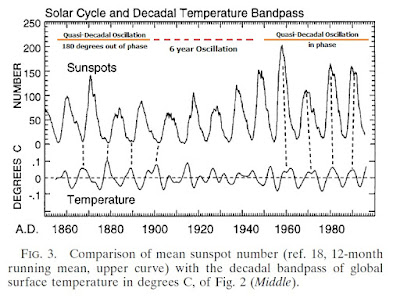 Keeling and Whorf [1,2], working with globally averaged temperature data for both land and sea (expressed as an anomaly beginning in 1855 and updated through mid-1995), report strong spectral peaks at 9.3, 15.2, and 21.7 years.  They refer to the 9.3 period as the quasi-decadal signal and the 21.7 year period as the bi-decadal signal.

Keeling and Whorf [1,2] show that the "near[quasi]*-decadal variations in global air temperature are characteristic of the past 141 years [1885 - 1995]*, except for a roughly 45-year interruption centered near 1920 [i.e. 1900 - 1945]*. This pattern has also emerged using spectral analysis, specifically from the beating of two frequencies found to be close to the 9th and 10th harmonics of the lunisolar tidal cycle of 93 years. Furthermore, temperature oscillations with periods near 6 years were found in the temperature record by spectral analysis near the time of interference of the two near-decadal oscillations [i.e. 1900 - 1945]*, and thus close in period to the 6-year repeat period of another prominent lunisolar tidal cycle."

[N.B. bracketed text with a "*" next to it are my additions to the original quote.]

B. Copland and Watts

Copeland and Watts [3] show ..."that decadal and bidecadal oscillations in globally averaged temperature show patterns of alternating weak and strong warming rates, and that these [warming rates]* underwent a phase change [with respect to the solar cycle]* around 1920.  Prior to that time, the lunar [tidal]* influence dominates, while after that time the solar influence dominates.  While these show signs of being correlated with the broad secular variation in atmospheric circulation patterns over time, the persistent influence of the lunar nodal cycle, even when the solar cycle dominates the warming rate cycles, implicates oceanic [tidal]* influences on secular trends in terrestrial climate."

Copeland and Watts [3] ... "pick up where Keeling and Whorf [1,2]* leave off, insofar as documenting decadal and bidecadal oscillations in globally averaged temperature trends is concerned, but...[claim]* ...that these are likely the result of a combined lunisolar influence, and not simply the result of lunar nodal and tidal influences [as claimed by Keeling and Whorf]*."

Copeland and  Watts [3] claim that ..."A bidecadal frequency of 20.68 years is too short to be attributed solely to the double sunspot cycle, and too long to be attributed solely to the 18.6 year lunar nodal cycle.  Instead, they prefer that ..."a better attribution is the beat cycle explanation proposed by Bell [5]*, i.e. a cycle representing the combined influence of the 22 year double sunspot cycle and the 18.6 year lunar nodal cycle."

C. Evidence For and Against Solar Driven Variations in World Mean Temperature

2. This means that there is little or no evidence for the 11.1 year sunspot number cycle in the historical world monthly temperature anomaly data. Such a signal should be visible if variations in the Total Solar Irradiance (TSI) have a direct influence upon the world's mean temperatures.

3. The solar explanation does not explain the hiatus in the quasi-decadal oscillations in the historical world monthly temperature anomaly data between 1900 and 1945, nor the reversion to a 6 year period of oscillation during this period.

4. The solar explanation cannot easily explain why the observed anti-correlation between the sunspot number and the world mean temperature anomalies prior to 1900, disappears between 1900 and 1945, and then changes phase by 180 degrees after 1950.

1. Henrik Svenmark [6,7] has proposed that that 22 year variation in the strength of the Sun's magnetic field modulates the albedo of the Earth through cosmic ray seeding of cloud formation.
If this theory is correct it could give support to the solar attribution for the 21.33 year bi-decadal oscillation seen in the historical world monthly temperature anomaly data. However there are at least two arguments against this explanation being correct:

a. The Svenmark Cosmic-Ray Cloud Model is still unable to overcome counter-arguments 3 and 4
above against a solar attribution for the 21.33 year bi-decadal oscillation.

b. Laken et al. [8] have used new high quality satellite data to show that the El Niño Southern Oscillation [ENSO] is responsible for most changes in cloud cover at the global and regional levels. They also found that galactic cosmic rays, and total solar irradiance did not have any statistically significant influence on changes in cloud cover.

The evidence cited above clearly does not support the solar explanation for the Quasi-Decadal and Bid-Decadel Oscillations. Indeed, if anything, it implies that the lunar tidal explanation is by far the stronger of the two options.

Additionally, Laken et al. [8] claims that the ENSO is responsible for much of the changes in cloud cover at regional and global levels. If this is true, then it would be much more plausible to propose that variations observed in the historical world monthly temperature anomalies data should be determined by whatever mechanism controls the long-term variations in the ENSO.

Evidence is beginning to mount that the ENSO climate phenomenon is being primarily driven by by the long-term luni-solar tidal cycles. The purpose of this blog post is to further investigate this possibility.

A. Evidence that the onset of El Nino events are driven by the Luni-solar tides.

Here is a quick summary of the evidence to support the claim that the timing for the onset of El Nino events is determined by the luni-solar tidal cycles:

2. Li [14], Li and Zong [15], Li et. al. [16], and Krahenbuhl [17] clearly show that luni/solar induced atmospheric tides are present at altitudes above about 3000 m.
3. Wilson [18] shows that if you control for the changes in the mean (atmospheric) sea-level pressure (MSLP) of the Southern Hemisphere Sub-Tropical High Pressure Ridge that are caused by the Sun (i.e. the seasonal cycle), then it possible to see the much smaller long-term changes caused by the luni-solar tides.
4. Wilson [19] shows that lunar atmospheric tides can produce small but significant long term changes in the overall pressure of the four main semi-permanent sub-tropical high pressures systems in the Southern Hemisphere. Wilson shows that an N=4 standing wave-like pattern in the MSLP circumnavigates the Southern Hemisphere once every every 18 or 18.6 years. This standing wave will naturally produce large extended regions of abnormal atmospheric pressure passing over the semi-permanent South Pacific subtropical high roughly once every ~ 4.5 - 4.7 years. These moving regions of higher/lower than normal atmospheric pressure will increase/decrease the MSLP of this semi-permanent high pressure system, temporarily increasing/reducing the strength of the East-Pacific trade winds. This could led to conditions that preferentially favor the onset of La Nina/El Nino events.
5. Wilson [20] has also shown that based upon the premise that the 31/62 year Perigy-Syzygy seasonal tidal cycle plays a significant role in sequencing the triggering of El Niño events, its effects for the following three new moon epochs:
New Moon Epochs:
Epoch 1 - Prior to 15th April  1870
Epoch 3 - 8th April 1901 to 20th April 1932
Epoch 5 - 23rd April 1963 to 25th April 1994

should be noticeably different from its effects for the following full moon epochs:


and these simple rules explain the onset years for all but five of the 27 moderate to strong El nino events that have occurred since 1865-70 when directly measured world-wide sea-surface temperatures have become available.
6. Following in the footsteps of Sidorenkov [9-13] and Wilson [18-20] , Paul Pukite [21] has found that he can generate both the QBO and the SOI index using the luni-solar tidal forcing upon the Earth. He accomplishes this by allowing for the aliasing of the tidal signal caused by the seasonal (yearly) cycles.
Using the seasonally aliased tidal forcing as his forcing term for the QBO, Pukite is able to accurately reproduce the historical observed QBO time series.  Pukite claims that:
"The rationale for this is that the faster lunar cycles will not cause the stratospheric winds to change direction, but if these cycles are provoked with a seasonal peak in energy, then a longer-term multi-year period will emerge. This is a well-known mechanism that occurs in many different natural phenomena."
In essence, he is adopting the principle laid out in Wilson [18] which proposed that effects of the long-term tides upon the Earths's atmosphere (and oceans) are amplified by annual (i.e. seasonal) aliasing. This principle states that:
"The most significant of the large-scale systematic variations of the atmospheric surface pressure, on an inter-annual to decadal time scale, are those caused by the seasons. These variations are predominantly driven by changes in the level of solar insolation with latitude that are produced by the effects of the Earth's obliquity and its annual motion around the Sun. This raises the possibility that the lunar tides could act in "resonance" with (i.e. subordinate to) the atmospheric pressure changes caused by the far more dominant solar driven seasonal cycles. With this type of simple “resonance” model, it is not so much in what years do the lunar tides reach their maximum strength, but whether or not there are peaks in the strength of the lunar tides that re-occur at the same time within the annual seasonal cycle."
There are two steps to Pukite's model:

(1) Determine the lunar gravitational potential as a function of time, and

Pukite indicates that this last part is critical, as that emulates the aliasing required to remove the sub-monthly cycles in the lunar forcing.

Finally, he says that:

"If one then matches this plot against the QBO time-series, you will find a high correlation coefficient. If the lunar potential is tweaked away from its stationary set of parameters, the fit degrades rapidly."

7. It known that persistent Westerly Wind Bursts associated with the penetration of Madden Julian Oscillations into the Western Pacific ocean are responsible for wide-spread reversal of the westerly Equatorial trade winds which are associated with the onset or triggering of El Nino events.

Lian et al. [22] and Chen et al. [23] have shown that for every major El Nino event since 1964, the drop off in easterly trade wind strength has been preceded by a marked increase in westerly wind bursts (WWB) in the western equatorial Pacific Ocean. These authors contend that the WWB generate easterly moving equatorial surface currents which transport warm water from the warm pool region into the central Pacific. In addition, the WWB create down-welling Kelvin waves in the western Pacific that propagate towards the eastern Pacific where they produce intense localized warming [McPhaden 24]. It is this warming that plays a crucial in the onset of El Nino events through its weakening of the westerly trade winds associated with the Walker circulation.

Wilson [2016] found that  the times when Pacific-Penetrating Madden Julian Oscillations (PPMJO) are generated in the Western Indian Ocean are related to the phase and declination of the Moon. This findings provide strong observational evidence that the lunar tidal cycles are primarily responsible for the onset of El Nino events.  (This paragraph was updated on 11/01/2015)

[2] Keeling, CD.  and Whorf,  TP.  (1997), Possible forcing of global temperature by the oceanic tides.  Proceedings of the National Academy of Sciences., 94(16), pp. 8321-8328.
[3] Copeland, B. and Watts, A. (2009), Evidence of a Luni-Solar Influence on the Decadal and Bidecadal Oscillations in Globally Averaged Temperature Trends, retrieved at:
http://wattsupwiththat.com/2009/05/23/evidence-of-a-lunisolar-influence-on-decadal-and-bidecadal-oscillations-in-globally-averaged-temperature-trends/

[25] Wilson, I.R.G. (2016) Do lunar tides influence the onset of El Nino events via their modulation of Pacific-Penetrating MAdden Julian Oscillations?, submitted to the The Open Atmospheric Science Journal.
Posted by Ninderthana at 3:21 AM