"Occasional extreme tides caused by unusually favorable alignments of the moon and sun are unlikely to influence decadal climate, since these tides are of short duration and, in fact, are barely larger than the typical spring tide near lunar perigee."

This post sets out to show that this claim is not completely true.

Richard Ray and David Cartwright (2007) have calculated the strengths and dates of the maximal lunar-solar tidal potentials over the period from 1 to 3000 A.D.  Thankfully, Prof. Ray has kindly made this data available upon request. The following arguments are based upon this data set which is known as the Ray-Cartwright Table.

Figure 1 below shows the total equilibrium ocean tides (T) caused by the lunar-solar tides between the years 2000 and 2010 A.D i.e.

where Vtot is the total tidal potential due to the Sun and Moon, g is the acceleration due to gravity (= 9.82 m/s/s) and T is in cm. 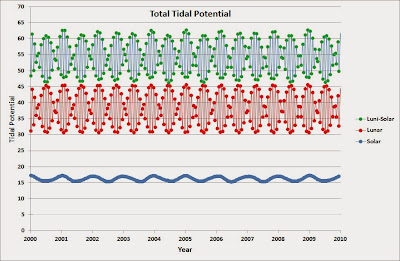 From figure 1 we can see that:

b) Vsol peaks once every year when the Earth is at or near perihelion (blue curve).

c) The largest values of Vlun occur whenever the subtended angle of the Sun and Moon (as seen from the Earth's centre) is either less than 9 degrees (i.e. close to New Moon) or greater than 171 degrees (i.e. close to Full Moon). This means that the largest values of Vlun occur very close to each New and Full Moon where they produce the Spring Tides (red curve).

However, Ray (2007) and Ray and Cartwright (2007) have missed one important detail. The problem with their simple analysis is that it does not take into account the different ways in which the lunar tides can interact with the Earth’s climate system.

The most significant large-scale systematic variations upon the Earth's climate on an inter-annual to decadal time scale, are those caused by the annual seasons. These variations are predominantly driven by changes in the level of solar insolation with latitude that are produced by the effects of the Earth's
obliquity and its annual motion around the Sun.

This raises the possibility that the lunar tides act in "resonance" with (i.e. subordinate to) the atmospheric changes caused by the far more dominant solar driven seasonal cycles. With this type of
simple “resonance” model, it is not so much in what times do the lunar tides reach their maximum strength, but whether or not there are peaks in their strengths that re-occur at the same time within the annual seasonal cycle.

A good analogy is a child on a swing. If you consider the annual seasons as being the equivalent of the child on the swing as they slowly move back and forward then the lunar tides can be thought of as the hand of the person who pushes the swing. Clearly, the hand pushing the swing is most effective in imparting energy to the child on the swing if they give a push at the highest point of their motion. Similarly, peak lunar tides should have their greatest impact upon the seasonal swings of the climate system if they are applied at a specific point in the seasonal cycle e.g. the summer or winter solstices.

Figure 2 shows all of the total tidal potentials listed in the Ray-Cartwright Table that occur in the month of January between the years 1900 and 2010 A.D. 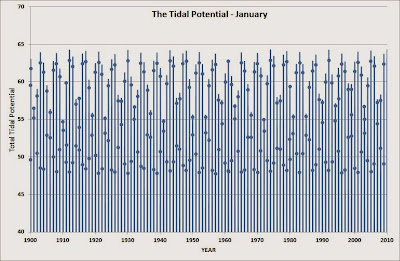 Note: The repetition cycle of 4.425 years is simply half the  time required for the lunar line-of-apse to precess once around Earth with respect to the stars. 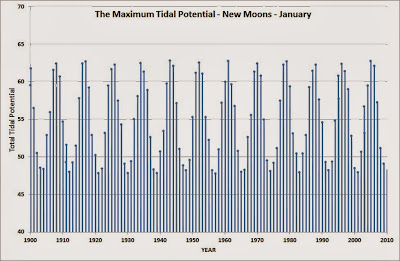 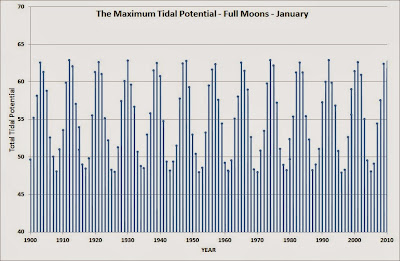 While figure 4 shows that the peak equilibrium ocean tide (or total tidal potential) at Full Moon vary bu the same amount over the same time scale of 8.85 years. However, the peak tidal potentials are shifted in phase by 180 degrees (equivalent to 4.425 years).

The effect of lunar phase on the magnitude of monthly variation in the total tidal potential on decadal time scales must be accounted for because at times near summer/winter solstice i.e. during the months of December or January and June or July, the tides induced by spring tides at New and Full Moon affect distinctly different parts of the planet.

Figure 5 shows the latitude of the sub-lunar point on the Earth's surface for each of the tidal potentials produced by the (near) New and (near) Full Moons that are displayed in figures 3 and 4. 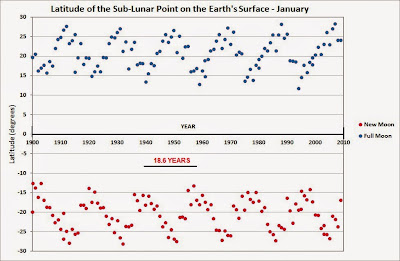 Note: Figure 5 shows that a clear 18.6 year sinusoidal variation in the latitude of the sub-lunar points tales place in each hemisphere. 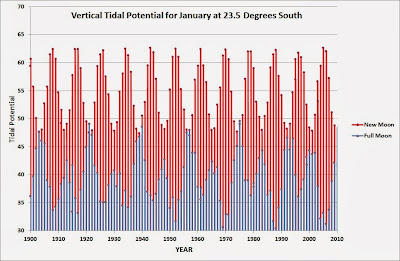 Note: All the claims that are made in this post by the author also applies if the interaction window between the lunar tides and the Earth's climate occurs over a three month (seasonal) time period centred upon the winter solstice (May-Jun-Jul) or the summer solstice (Nov-Dec-Jan).

"Occasional extreme tides caused by unusually favorable alignments of the moon and sun are
unlikely to influence decadal climate, since these tides are of short duration and, in fact, are barely larger than the typical spring tide near lunar perigee."

is not completely true.

Indeed if, as is most likely, the interaction between the lunar tides and Earth's climate primarily takes place over a monthly to season window then it clear from the above post that the total tidal potential can vary by at least +/- 13.5 %  either side of its mean peak value of 55.5 cm, on a time scale of 8.85 years.

Richard Ray(2007) also claimed that because of the short duration of each tidal event:

"A more plausible connection between tides and near-decadal climate is through “harmonic beating”
of nearby tidal spectral lines. The 18.6-yr modulation of diurnal tides is the most likely to be  detectable."

Note: Richard Ray is referring to the beat period  between the lunar Draconic month and the lunar
Sidereal month known as the nodal period of lunar  precession:

This claim may be partly true.