Connecting the Planetary Periodicities to Changes in the Earth's LOD

A. The Connection Between Extreme Pergiean Spring Tides and Long-term Changes in the Earth's Rotation Rate as Measured by the Rate-of-Change of its Length-of-Day (LOD). (*)

If you plot the rate of change of the Earth's Length of Day (LOD) [with the short-term atmospheric component removed] against time [starting in 1962] you find that there is a ~ 6 year periodicity that is phase-locked with the 6 year period that it takes the lunar line-of-nodes  to re-align with the lunar line-of-apse [see the first note directly below and reference [1] for a description of the method used to determine the time rate of change of LOD]. 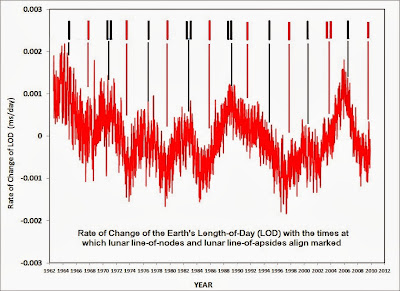 [NB: that in the case of figure 1 the line-of-nodes and line-of-apse are just re-aligning with each other. They do not necessarily realigned with the Sun - see figure 2].

A much better alignment between the lunar orbital configuration and the rate of change of the Earth's LOD is achieved if we re-plot figure 1 below and superimpose the times when solar/lunar eclipses occur at or near the times of lunar perigee. These events occur at or very near to the times when both the lunar line-of-apse and lunar line-of-nodes point directly towards or away from the Sun. When the Moon is in this particular configuration with respect to the Sun and the Earth (marked by vertical red lines in figure 2), our planet experiences extremely strong luni-solar tidal forces known as Perigean Spring Tides. Figure 2 (top graph below) shows whenever this occurs, the rate of change of the Earth's LOD undergoes an inflection in its value. 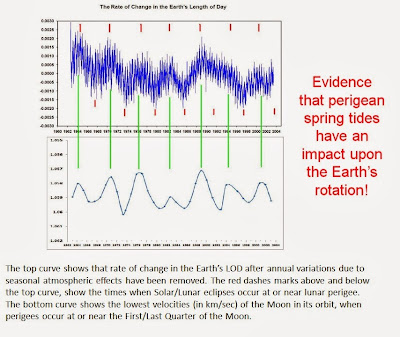 The tight relationship between the configuration of the lunar orbit and the rate of change of LOD is further reinforced by the lower graph in figure 2. This shows lowest velocity (in km/sec) of the Moon its orbit, when perigee occurs at or near the First/Last Quarter of the Moon. This is a reasonable proxy for the actual strength of global lunar tides impacting the Earth (see note below).

[NB: Keeling and Whorf (1997) indicate that an: "approximate relative measure of the global tide raising forces of individual strong tidal events is given by the angular velocity of orbital motion of the Moon with respect to the perturbed motion of perigee, in degrees of arc per day at the moment of maximum forcing. They go on to say that: "The tide raising forces define a hypothetical equilibrium tide which approximates the global average strength of the actual tides."]

Hence, figure 1 and 2 firmly establish that there is a direct connection between the conditions that produce extreme Perigean Spring Tides and long-term changes in the rate-of-change in the Earth's Length-of-Day (LOD).

Now, if we can show that the other planets of the Solar System have an effect upon setting the rates of precession of the line-of-nodes and line-of-apse of the lunar orbit then we can plausibly claim that the spatio-temporal configuration of the planets plays a role in producing changes in the Earth rotation rate on decadal to inter-decadal time scales.

NB: The following arguments use these mean planetary orbital periods:

If we look at the realignment period between the half pro-grade synodic period of Jupiter and Saturn (1/2 JS cycle) with the retrograde realignment cycle of the inferior-conjunctions of Venus and Earth with the Terrestrial year (VE cycle) i.e.

The first point that needs to be made about this is that there appears to be an almost perfect synchronization between the three tidal harmonic intervals and sub-multiples of the sidereal orbital period of Jupiter (TJ = 4332.82 days = 11.8624 sidereal years - note this is slightly different from the adopted value):

The synchronization between the orbital period of Jupiter and the rate of precession of the lunar nodes is significant. However, this synchronization could be dismissed as just a coincidence, if it were not for one further piece of evidence that links the nodal precession of the lunar orbit with the orbital motion of the planets. A remarkable near-resonance condition exists between the orbital motions of the three
largest terrestrial planets with:

This means that these three planets return to the same relative orbital configuration at a whole multiple of 6.40 years. Amazingly, the point in the Earth’s orbit where the 2nd tidal harmonic occurs (i.e. 1 ¼ TD), rotates around the Sun (with respect to the stars) once every 6.3699 years. This is just over three hundredths of year less than the time required for the realignment of the positions of the three largest terrestrial planets.

Thus, the realignment time for the positions of the three largest terrestrial planets and the orbital period of Jupiter appear to be closely synchronized with the time period over which the Earth experiences a maximum change in the tidal stress caused by the precession of the line-of-nodes of the lunar orbit.

The periods of precession of the line-of-nodes and line-of-apse of the lunar orbit (when measured with respect to the stars).appear to be synchronized with the relative orbital periods of Jupiter and the three largest terrestrial planets.

In addition, long-term changes in the rate of change of the Earth's LOD [excluding short-term changes (less than a couple of years) cause by the exchanges of angular momentum between the atmosphere, oceans and the Earth's crust] appear to be synchronized with the conditions that produce extreme Perigean Spring Tides.

This implies that the spatio-temporal configuration of the planets must play a role in producing changes in the Earth rotation rate that we see on decadal to inter-decadal time scales.

Posted by Ninderthana at 9:46 PM