IS THIS A PLANETARY SIGNATURE IN OUR CLIMATE SYSTEM?

The diagram below shows a Morlet Wavelet Transform of the winter (North Pacific Index) NPI index.
The North Pacific (NP) Index is the area-weighted sea level pressure over the region 30°N-65°N, 160°E-140°W. The NP index is defined to measure interannual to decadal variations in the atmospheric circulation. 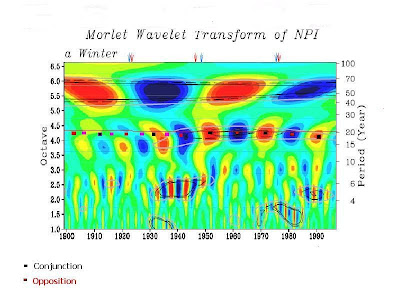 This result is supported by a comparable figure from:

ADVANCES IN ATMOSPHERIC SCIENCES, VOL. 20, NO. 5, 2003, PP. 694–710 694
Joint Propagating Patterns of SST and SLP Anomalies in the
North Pacific on Bidecadal and Pentadecadal Timescales
ZHU Yimin and YANG Xiuqun 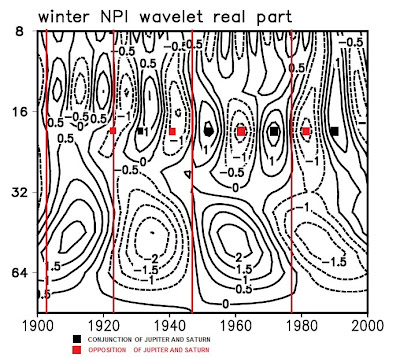 What we see in these figures is a remarkable match between the phase and period of Jupiter-Saturn conjunctions and oppositions and the bi-decade cycle in the winter NPI index. This match is best between the years of 1947 and 1991.

This means that solar inertial motion (SIM) about the Barycentre mimics the three bi-decadal cycles nested [in-phase] inside a longer penta-decadal cycle. The synchronization between these two phenomenon is quite remarkable and suggests that there may be an underlying physical link.

Posted by Ninderthana at 9:42 AM