See the bottom of this post for essential background
reading if you knowledge of the formulation and
evolution of the V-E_J Tidal-Torquing Model is
not up-to-date :

The problem with the collective blog postings about the
Spin-Orbit Coupling or Tidal-Torquing Model that are described
at the end of this post is that they only look at the tidal-torquing
(i.e. the pushing and pulling of Jupiter upon the Venus-Earth
tidal bulge in the Solar convective zone) when Venus and Earth
are inferior conjunction (i.e. when Venus and Earth are on the
same side of the Sun). However, a tidal bulge is also produced
when Venus and the Earth align on opposites sides of the Sun,
as well (i.e  at superior conjunction).

This means that in the real world, tidal bulges are induced in
the convective layer of the Sun once every 0.8 years rather
than every 1.6 years, as assumed in the original basic model.
This is achieved by a sequence of alternating conjunctions
of Venus and the Earth:

Unfortunately, logic tells you the gravitational pushing/pulling
of Jupiter on the V-E tidal bulge at a given inferior conjunction
will be roughly equal opposite to the pushing/pulling that occurs
at the next superior conjunction. At first glance, this would seem
to destroy any chance for the gravitational force of Jupiter (acting
on the V-E tidal bulge) to produce any nett spin in the outer
convective layers of the Sun. However, it turns out that the
gravitational tugging of Jupiter at inferior V-E conjunction is
not completely cancelled by the tugging at the next superior
V-E conjunction. This lack of cancellation is primarily related
to the changing orientation and tilts of the respective orbits
of Venus and Jupiter.

The diagram immediately below shows sunspot number
(SSN) for solar cycles 0 through  to 9. Plotted below the
sunspot number curve in this figure is the net tangential torque
of Jupiter acting the V-E tidal bulge, where Jupiter's tangential
torque at one V-E inferior conjunction is added to Jupiter's
tangential torque at the next V-E superior conjunction to
get the nett tangential torque. In this diagram, a positive
nett torque means that the rotational speed of the Sun's
equatorial convective layer is sped-up and a negative
nett torque means that the equatorial convective layer
is slowed-down.

[N.B. The nett torque curve has been smoother with a
5th and 7th order binomial filter to isolate low frequency
changes] 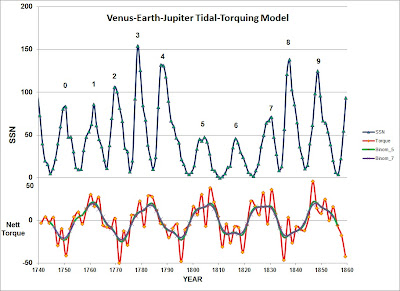 Some important things to note are:

a) The nett torque of Jupiter acting on the V-E tidal bulge
has a natural 22 year peridocity which matches the 22
year hale (magnetic) cycle of solar activity.

b) the equatorial convective layers of the Sun are sped-up
during ODD solar cycles and slowed-down during EVEN
solar cycles.


These two points provide a logical explanation for the
Gnevyshev−Ohl (G−O) Rule for the Sun.

This rule states that if you sum up the mean annual Wolf
sunspot number over an 11 year solar cycle, you find
that the sum for a given even numbered sunspot cycle is
usually less than that for the following odd numbered
sunspot cycle (Gnevyshev and Ohl 1948). The physical
significance of the G−O rule is that the fundamental activity
cycle of the Sun is the 22 year magnetic Hale cycle, which
consists of two 11 year Schwabe cycles, the first of
which is an even number cycle (Obridko 1995). While
this empirical rule generally holds, there are occasional
exceptions such as cycle 23 which was noticeably weaker
than cycle 22.


These two points are also in agreement with the results of
Wilson et al. 2008.


Does a Spin–Orbit Coupling Between the Sun and the Jovian Planets Govern the Solar Cycle? 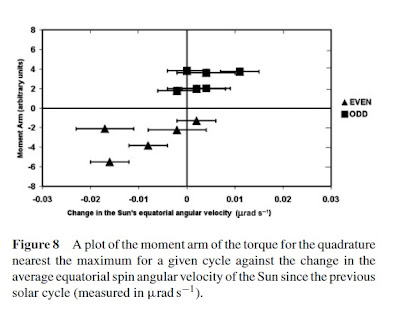 Figure 8 from Wilson et al. 2008 (above) shows the moment arm
of the torque for the quadrature Jupiter and Saturn nearest the
maximum for a given solar cycle, plotted against the change in the
average equatorial (spin) angular velocity of the Sun since the previous
solar cycle (measured in μrad s−1). The equatorial (≤±15 deg)
angular velocities published by Javaraiah (2003) for cycles
12 to 23 have been used to determine the changes in the
Sun’s angular velocity (since the previous cycle) for cycles
13 to 23.


What this graph clearly shows is that the Sun's equatorial
angular velocity increases in ODD solar cycles and decreases
in EVEN solar cycles, in agreement with the V-E-J
Tidal-Torquing model.

The original figure plotted at the top of this blog post is
reproduced here with superimpose blue and red vertical
lines showing the times where the Jupiter's nett torque
(acting on the V-E tidal bulge) changes sign (i.e. direction
with respect the axis of the Sun's rotation). The points
of sign change in Jupter's nett torque that occur just
before solar sunspot minimum are marked by blue lines
while the points that occur after solar minimum are
marked by red lines. The figure below shows that

i) Normally their is a phase-lock between the time of sign
change in Jupiter's torque and solar minimum.

ii) As soon as this phase-lock is broken (i.e. around about 1777)
22 years later (i.e. one Hale cycle) after the loss of lock, there is
a collapse in the strength of the solar sunspot cycle. 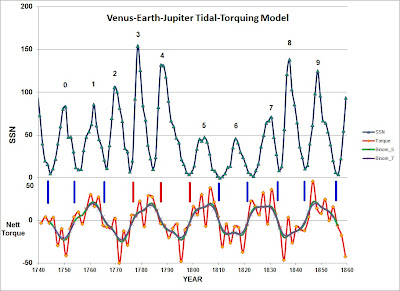 The graph below shows if you plot the torque of Jupiter upon
the V-E tidal bulge at each inferior and superior conjunction of
Venus and Earth (rather than their consecutive sum), the actual
magnitude of Jupiter's torque is greatest at the times that are at
or near solar minimum. However, even though Jupiter's torque
are a maximum at these times, the consecutive torques at the
inferior and superior conjunctions of Venus and the Earth almost
exactly cancel each other out.

It is interesting to speculate whether the rapid fluctuations at
times when Jupiter's torque is strongest could explain why the
solar magnetic cycle is driven to synchronize with the Jupiter's
tidal torquing force. 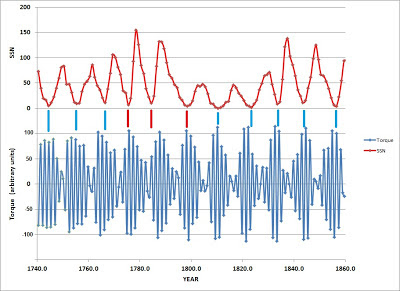 
Essential background reading if you knowledge of
the evolution of this model is not up-to-date :


Do Periodic Peaks in the Planetary Tidal Forces Acting Upon the Sun Influence the Sunspot Cycle?


I.R.G. Wilson
A free download of the paper is available in the General
Science Journal were it was published in 2010

Why does the solar cycle keep re-synchronizing itself with the gravitational force of Jupiter that is tangentially pushing and pulling upon the Venus-Earth tidal bulge in the Sun's convective layer?

Why are the even and odd sunspot cycle maxima synchronized with the position angle of Jupiter at the time of Earth-Venus alignments?

Posted by Ninderthana at 8:12 PM