The following discussion is based upon a WUWT post
that highlighted a paper called:

Persistence in California Weather Patterns
by Jim Goodridge - State Climatologist (Retired)
which can obtained from:
http://wattsupwiththat.com/2007/10/07/california-climate-pdo-lod-and-sunspot-departure/

In this paper, Goodridge notes that the accumulated departure
from average of 47 Californian de-trended temperature records
(figure 1) shows a remarkable similarity with the accumulated
departure from the average Pacific Decadal Oscillation (PDO)
(figure 2). 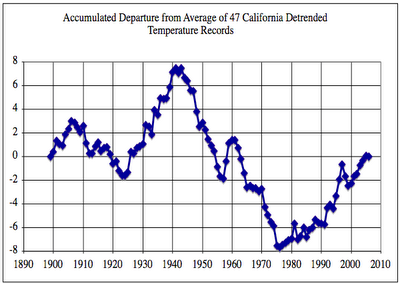 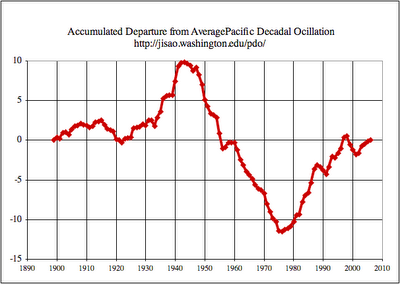 Goodridge notes that link between the PDO and Californian
land surface temperatures is provided by the prevailing coastal
wind directions on the Californian coast that are associated
with the rising and declining phases in the accumulated departure
from the average PDO.

"The accumulated departure from average plot of the PDO
index has a peak in about 1944 as well as during the current
period of heating starting in 1975. The rising limb of this
PDO index represents a warming period of SST on the
West Coast coast, where as a declining trend represents
a time of cooling. In general, cooling on the US Pacific
Coast occurs when coastal North winds induce offshore
coriolis force that result in off shore winds that lower tides
that induce cold-water upwelling. This reflects the delicate
hydrostatic balance of the oceans. Warming SST is associated
with South winds that induce an onshore coriolis force with
higher tides, which suppress cold-water upwelling."

In addition, Goodridge notes that the variations in the Earth's
Length-of-Day (LOD), a quantity that is inversely related
to the Earth rotation rate, appears to closely match the
observed changes in the accumulated departure from the
average PDO (compare figure3 with figures 1 & 2): 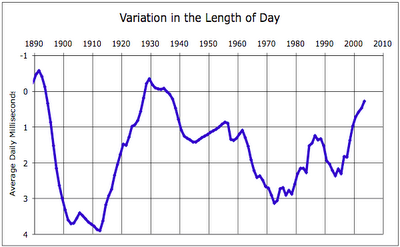 Goodridge provides a possible explanation for this causal link:

Posted by Ninderthana at 8:05 PM