§Thanks to Bob Tisdale, we now know that the effect of El-Niño’s upon global temperature have been underestimated.

§The El Niño’s seems to be an important player in the recent rapid warming of the worlds temperatures between 1976 & 2005.

§But what if extreme tides caused by the Moon play a role in triggering El Niño[/La Niña]  events?

The are five conditions that must be met if the Earth is to experience the most extreme tidal events known as Extreme Proxigean Spring Tides:

A. When the Earth, Moon and Sun all align. These extremes in the tides are known as Spring Tides, occurring twice per month at New and Full Moon. 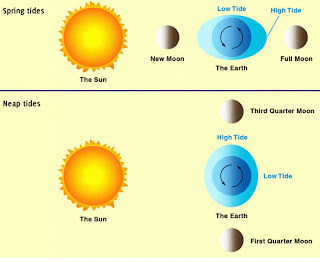 B. When the line-of-apse of the lunar orbit (connecting the points of perigee and apogee in the lunar orbit) align with the Sun (as seen from Earth) at New and Full Moon. 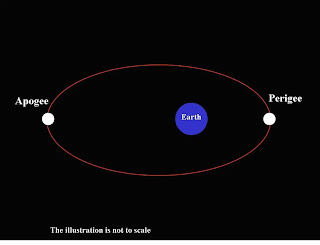 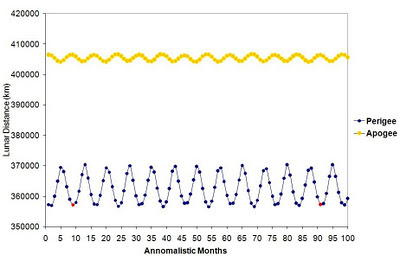 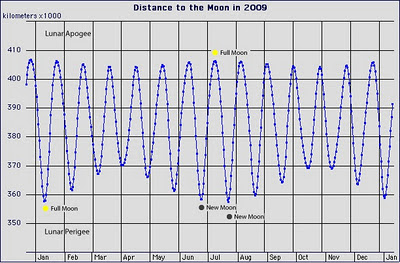 D. When the line-of-nodes (connecting the ascending and descending nodes of the lunar orbit) align with the Sun, as seen from the Earth, at times of New and Full Moon. If these types of alignments occur at or near the times of Perigean Spring Tides [often associated with solar and lunar eclipses], it further enhances the strength of these tidal event. 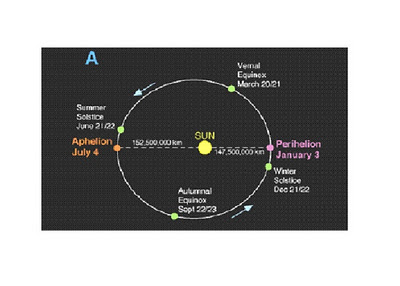 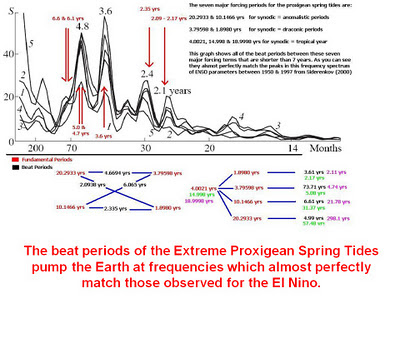 Extreme tidal effects are known to have an important influence upon the amount of up welling of cool deep ocean water in the world's oceans via deep ocean tidal dissipation.

The amount of power deposited by the Sun and the Moon through deep-ocean tidal dissipation could be as much as 1 Terra-Watt !

This is enough power to drive almost half all the up welling of deep cool ocean water around the world!!

and there is compelling evidence, as well, that shows that Perigean Spring Tides have an impact on the Earth's rotation. 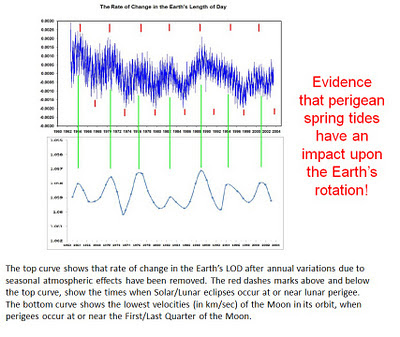 So what does this have to do with the ENSO El Nino/LA Nina phenomenon?

Well, if you look at the type of Proxigean Tides that occur in the year of or the year prior to the onset of all significant El Niño events between 1800 and 1987, you find that only the most extreme of these events occur at this time.

The following two diagrams are designed to place the most extreme Proxigean Spring Tides in the bottom right hand corner and the weakest Proxigean Spring Tides in the top left hand corner. The day of year, starting on April the 1st (no joke intended here), is shown along the X-axis. This starting date has been chosen so that Perihelion occurs on or about day 278, placing it on the right hand side of the diagram. Along the Y-axis, we have the number of minutes an eclipsing New or Full Moon occurs before or after perigee. This axis has been chosen to ensure that strongest alignment between the Earth-Sun line, the line-of-nodes, and the line-of-apses occurs near the bottom of the diagram. 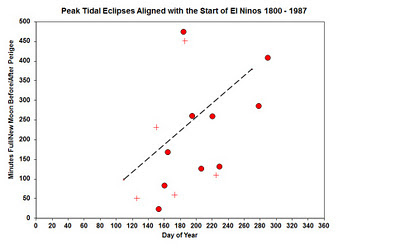 During years that DO NOT coincide with the year of or the year prior to the onset of all significant El Niño events between 1800 and 1987, you get systematically weaker proxigean tidal events. 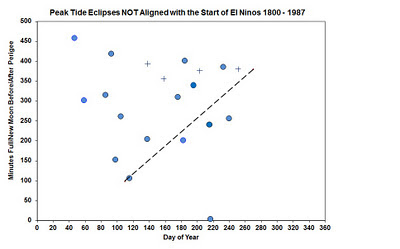 There is evidence to support the claim that the Perigean Spring Tides affect the Earth's rotation rate.

Extreme tidal effects are known to have an important influence upon the amount of up welling of cool deep ocean water in the world's oceans via deep ocean tidal dissipation.

The beat periods of the forcing terms of the Extreme Perigean Spring Tides pump the Earth at frequencies that almost exactly match those that are observed in the periodogram of the SOI index between 1950 and 1997.

There is evidence to support the contention that most extreme lunar tidal events (i.e. the extreme Proxigean Spring Tides) must play a role in triggering the El Niño phenomenon between 1800 and 1987.

Posted by Ninderthana at 4:02 PM