GAME OVER! This Madness has to end!

Climate scientists insist that rising atmospheric CO2 concentrations (measured in parts per million or ppm) are forcing the Earth’s atmospheric and oceanic temperatures to increase. They base their claim on the premise that CO2 is a greenhouse gas that prevents infrared light from escaping the Earth’s atmosphere. They propose that the trapped infra-red radiation results in a net gain in the energy that is stored in the Earth’s atmosphere (~ 2 %) and oceans (> 90 %).
The scientists quantify this build-up in energy using a parameter called the Earth’s [top of the atmosphere] Energy Imbalance (EEI). If the EEI is positive then the Earth’s climate system gains energy, if it’s negative then the system loses energy, largely due to the energy flow into and out of the oceans.
The best estimates of the observed EEI at the moment are about 0.8 watts per square metre (W m^-2). Many scientists implicitly assume that this energy imbalance is caused, in large part, by anthropogenic GHGs. Theoretical climate models indicate that if you take into account GHGs, ozone, the Earth’s albedo, aerosols, and solar irradiance, the net anthropogenic forcing component upon the Earth’s climate system should be about 1.6 +/- 0.8 W m^-2.
It is important to understand that climate scientists treat the rising atmospheric CO2 concentrations as a “forcing” upon the climate system. They measure the effect of this “forcing” in units of W m^-2 [i.e. joules (of energy) per second per metre^2]. This means that we need to look for a response to this “forcing” of the Earth’s atmosphere and oceans by CO2 in units that match that of the “forcing” itself i.e. watts or joules (of energy) per second [N.B. the m^-2 part of the units is superfluous because we can integrate of the entire area of the Earth’s surface]. Effectively, what this means is, that at time scales longer than about a year, the time-rate-of-change ocean heat content (d(OHC)/dt) should provide the most reliable indicator of the EEI.
Climate models indicate that the net EEI should become increasingly positive with time, as CO2 concentrations slowly increase. If this is the case, you would expect that the total energy content of the Earth’s oceans (e.g. from 0 to 2000 m) to increase at an ever-increasing rate with time. Note that this is the same as saying that the d(OHC)/dt (for 0 to 2000 m – measure in Zeta joules = 10^21 joules) should become increasingly positive with time, as well.
However, what if this is not true? In this case, it would bring into question CO2’s role in the forcing of the increasing world mean temperatures in recent decades.
The bottom graph in the following diagram shows the time-rate-of-change of the (0 to 2000m) OHC between 1940 and 2019.
h/t to Javier 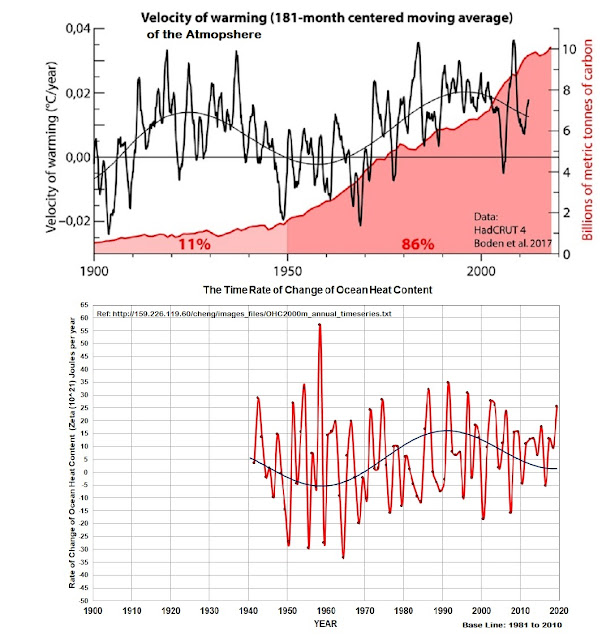 The OHC data is available at:
http://159.226.119.60/cheng/images_files/OHC2000m_annual_timeseries.txt
References:
[1] Cheng L. and J. Zhu, 2016, Benefits of CMIP5 multimodel ensemble in reconstructing historical ocean subsurface temperature variation, Journal of Climate. 29(15),5393-5416
[2]Cheng L. Et al., 2017: Improved estimates of ocean heat content from 1960 to 2015, Science Advances, 3,e1601545.
What this bottom graph shows is that, contrary to the predictions of the climate scientist, the mean observed time-rate-of-change of the (0 to 2000 m) OHC actually decreased between 1940 and 1960, as well as between 1990 and 2019. It has only systematically increased for the 30 years between 1960 and 1990.
However, the top graph in this figure clearly shows that CO2 levels have been rising steadily since the end of WWII (with 86 % of all CO2 added to the atmosphere occurring after 1950). Hence, the increasing concentration of CO2 has been steadily applying a forcing to the Earth’s climate system, which should have produced a steady increase in the time-rate-of-change of the OHC.
A crude indicator of how the net EEI is changing with time is the time-rate-of-change of the world mean atmospheric temperature (i.e. dT/dt – known as the velocity of warming – measured in deg C per year). This is shown in the top graph of the diagram above. It is clear that it is broadly consistent with the results that we have obtained using the D(OHC)/dt.
What this post conclusively shows is that anthropogenic CO2 cannot be the primary forcing term for recent observed increases in the world’s mean atmospheric and oceanic temperatures.

UPDATE 20/01/2020 12:55 P.M. AEST
***********
Given the large uncertainties associated with the OHC measurements prior to ARGO and bearing in mind the power of the central limit theorem, it is possible that the extrema (i.e. largest and smallest values) of the (annual) d(OHC)/dt time series could be used to track its mean value over time.
If you apply this concept to the Cheng et al. (2020) OHC data you get the lower one of the two graphs shown above.
What is remarkable about this plot is that while the d(OHC)/dt curve on the bottom only covers the 80 years from 1940 to 2019, it sinusoidal nature looks remarkably similar to that of the plot of d(T)/dt vs. time that covers the 120 years from 1900 to 2019.
Taken together, these two plots raise serious questions about CO2 as a major driver of world-mean atmospheric and oceanic temperatures.

************
The Central Limit Theorem does apply in this case. It all depends on how you define “the sample”.
The sample can be the individual measurements of OHC, which vary in both time and space. Each of these measurements has an error that gets progressively worse with time prior to the start of the use of ARGO buoys.
Equally, the sample could be defined as the total OHC (i.e. the sum of the individual measurements) at any given time. This is a repeated measurement of a quantity (n = sample size = 1) that has its own associated uncertainty. Granted, you can argue about whether or not this quantity has any useful meaning in the real world but climate scientists believe that it is representative of the state of the overall climate system.
https://www.khanacademy.org/math/ap-statistics/sampling-distribution-ap/sampling-distribution-mean/v/central-limit-theorem
Of course, the larger the sample size (n), the closer distribution points about the drifting long term means will approach that of a bell-curve. This means that we can use the upper and lower envelop of the observations to crudely gauge the drift of the 1st moment of d(OHC)/dt.
Posted by Ninderthana at 8:19 PM