These events occur when the Equatorial Southern Oscillation Index (Eq. SOI) is > 0.0 for an extended period of time as shown by the red curve in the first of two figures displayed below.

N.B. For a decription of the Eq. SOI go to:
https://www.climate.gov/news-features/blogs/enso/why-are-there-so-many-enso-indexes-instead-just-one

Wilson and Sidorenkov (2020) have developed a preliminary Lunar Alignment Density Index (LADI) that shows that there are increases in the frequency of periods of close alignment (< 0.6 days) between two lunar cycles, that precede each of these major El Nino events. See the areas in dark blue that are highlighted in the following graph.

The exact nature of the LADI cannot be discussed at this point because it is being submitted for publication in the peer-reviewed literature. Suffice it to say, that index incorporates two distinct lunar cycles that we believe are responsible for the generation of Equatorial Rosby and Kelvin waves. 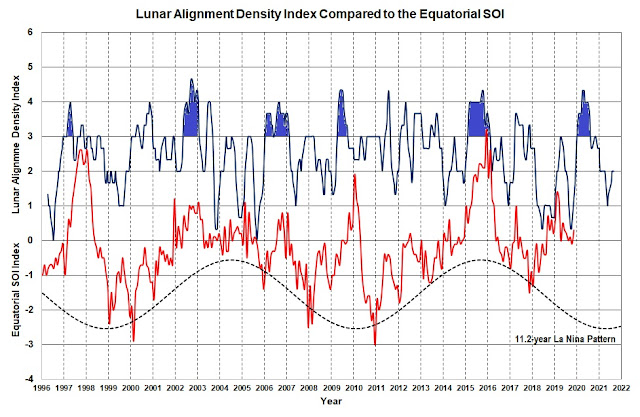 What the LADI tells us is that if our hypothesis connecting the two lunar cycles with the generation of Equatorial Rossby and Kelvin Waves is correct, then the should be a major El Nino event sometime in the coming year (i.e. 2020).

It is important to note, however, that the prediction of a 2020 El Nino event is subject to the caveat that we are approaching a period where the 11.2-year (solar-driven) cycle in the strength of the (Equatorial) West Pacific trade winds reaches a maximum sometime in 2021-22 (see the graph below). This could tip the Pacific Ocean towards a La Nina event just after the 2020 El Nino event (i.e. possibly by the 2020-21 southern-hemisphere summer.) 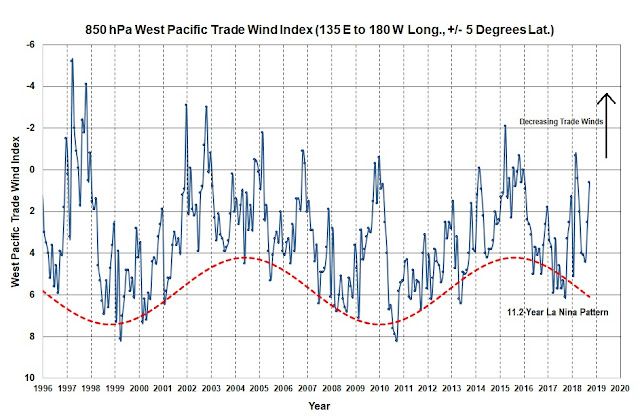