The Hodrick Prescott filter is designed to separate a time-series data into a trend component and a cyclical component using a technique that is equivalent to a cubic spline smoother. It acts as a low-pass filter that smooths out short-term temperature fluctuations, leaving behind the unattenuated long-term oscillatory signals (Copland and Watts 2009). Given the specific value of λ used here, this effectively translates to a band-pass that eliminates all the oscillatory temperature signals that have periods ≤ 7.0 years (Copland and Watts 2009).


Investigations of climate change generally involve the study of "forcings" upon the climate system. These are expressed in power terms that are measured in W m-2. This means that the best way to study temporal changes in these "forcings" is to look at time series of the first differences in the total energies that are associated with each forcing. Similarly, the mean temperature of the Earth's atmosphere is a measure of its total energy content. Thus, the best way to study the changes in the climate "forcings" that impact the mean temperature of the Earth's atmosphere is to look at time-series of the first difference in world-mean temperature, rather than time-series of the temperature itself [Goodman 2013].
Following this train of logic, the first difference curve of the smoothed trend component of the WMTA time series is calculated in degrees Celsius per month. The resultant first difference curve (multiplied by an arbitrary factor of 150) is plotted in the figure below (blue curve). Superimposed upon this is the raw temperature anomaly data (light-grey curve) and the smoothed trend component (red curve), displayed in units of degrees Celsius. 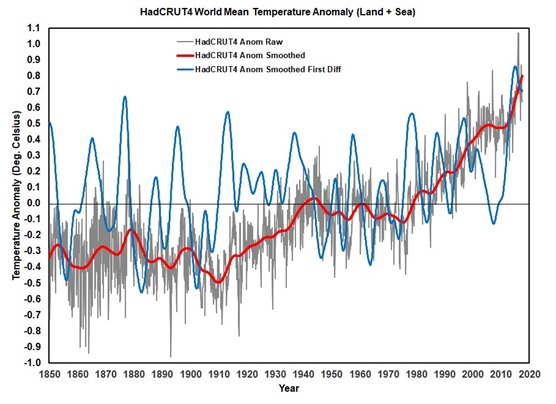 where t is the date expressed in decimal Gregorian years [N.B. For the purposes of this study, this curve will be referred to as the lunar tidal forcing curve – i.e. LTF curve].

from the earlier figure [N.B. For the purposes of this study, this curve will be referred to as the difference of the smoothed temperature anomaly curve – i.e. DSTA. It has units measured in degrees Celsius per month. In addition, the DSTA curve values have been scaled-up by a factor of 1000 to roughly match the variance of the LTF curve. This is done to aid the comparison between these two curves. 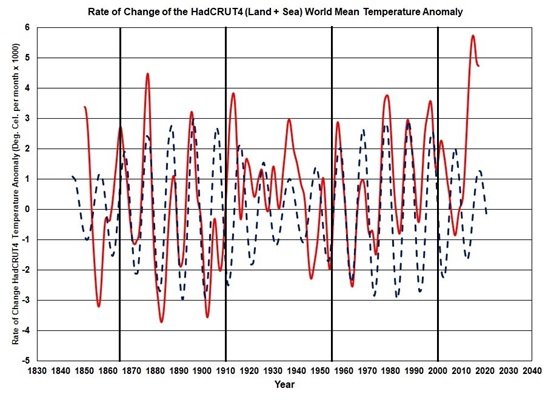 A comparison of the DSTA and LTF curves shows that that the timing of the peaks in the LTF curve closely match those seen in the DSTA curve for two 45-year periods.

The first going from 1865 to 1910 and the second from 1955 to 2000. Note that these years are delineated by the black vertical lines in this figure. During these two epochs, the aligned peaks of the LTF and the DSTA curves are separated from adjacent peaks by roughly the 9.6 years, which is close to the mean of 9.1 and 10.1469 years. This is in stark contrast to the 45-year period separating these two epochs (i.e. from 1910 to 1955), and the period after the year 2000, where the close match between the timing of the peaks in LTF and DSTA curves breaks down, with the DSTA peaks becoming separated from their neighboring peaks by approximately 20 years.

Hence, the variations in the rate of change of the smoothed HadCRUT4 temperature anomalies closely follow a “forcing” curve that is formed by the simple sum of two sinusoids, one with a 9.1-year period which matches that of the lunar tidal cycle, and the other with a period of 10.1469-year that matches that of half the Perigean New/Full moon cycle. This is precisely what you would expect if the natural periodicities associated with the Perigean New/Full moon tidal cycles were driving the observed changes in the world mean temperature on decadal time scales.

Copeland, B. and Watts, A., 2009, Evidence of a Luni-Solar Influence on the Decadal and Bi-decadal Oscillations in Globally Averaged Temperature Trends, retrieved at: