Figure 1 (below) shows the maximum daily temperature
for the South Australian capital city of Adelaide for the
summer of 2009-10. The data comes from the High-
Quality Australian Daily Temperature Data Set
ftp://ftp.bom.gov.au/anon/home/ncc/www/change/HQdailyT 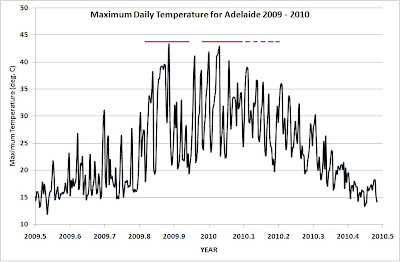 Summers in Adelaide are characterized by frequent
hot-spells with maximum temperatures exceeding 35
degrees celsius. These hot-spells generally last for a
day or two before temperatures are moderated by
flows of colder air from the south.

The highly variable nature of maximum summer
temperatures in Adelaide means that the best way
to characterize the average summer [December/
January/February (DJF)] maximum temperature
is to use the median rather than the mean.

Figure 2 (below) shows the summer-time (DJF)
median maximum temperature for Adelaide between
1888 and 2011. 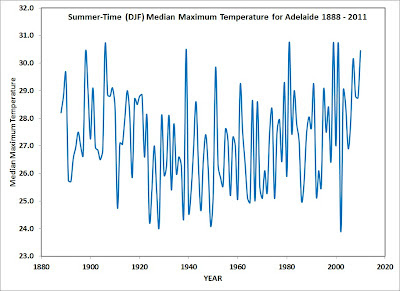 Preliminary Results:
If you use SSA to investigate the de-trended maximum
temperature time series (see figure 2), you find that there
are spectral peaks at all sub-multiples of the 22.3 year
Hale (H) cycle from H/2 to H/10. The most prominent
sub-harmonics are those at H/3, H/6, H/9 and H/10.

This result strongly suggests that the long-term median
summer time maximum temperatures in Adelaide are
primarily being driven by factors that are associated
with the 22.3 year Solar Hale Cycle.

The presence of sub-harmonics in the temperature record
is indicative of the fact that the ~ 22 year forcing term
must have a broadened temporal structure that is
triangular like in appearance. 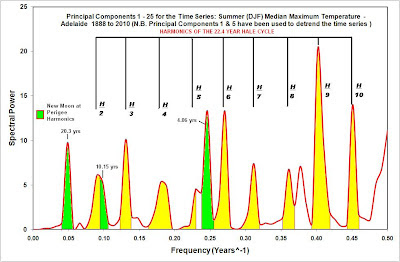 This result is broad general agreement with the results of
Thresher (2002) who finds that the variability in the strength
of the zonal west winds (along their northern margins) broadly
correlate with the 22 year sunspot cycle [see abstract below].

Hence, the most likely causation sequence is:

ABSTRACT
Atmospheric circulation in the southern mid-latitudes is
dominated by strong circum-Antarctic zonal west winds
(ZWW) over the latitude range of 35 to 60 °S. These
winds exhibit coherent seasonal and interannual variability,
which has been related both to Antarctic (e.g. polar ice)
and low-latitude climate (e.g. El Ni˜no–southern oscillation)
parameters. Historical and recent studies suggest that,
at its northern margins, variability in the ZWW also has
a marked quasi-decadal component. Analysis of sea-level
pressure and rainfall data for the Australian region, South
Africa and South America confirms frequent indications
of quasi-decadal variability in parameters associated with
the ZWW, which appears to be in phase around the
hemisphere. This variation broadly correlates with the
sunspot cycle, and specifically appears to reflect
sunspot-correlated, seasonally modulated shifts in the
latitude range each year of the sub-tropical ridge over
eastern Australia. Sunspot-correlated variability in the
southern mid-latitudes is likely to have substantial effects
on temperate climate and ecology and is consistent with
recent models of solar effects on upper atmospheric climate,
though the mechanisms that link these to winds and rainfall
at sea level remain obscure.
Posted by Ninderthana at 7:29 AM